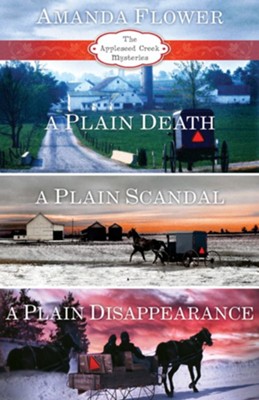 ▼▲
For the first time, you can now get all three novels in Amanda Flower’s Appleseed Creek Mystery Series together in one trilogy book.

The series begins with the Amish mystery novel A Plain Death.  After moving to Amish country, new resident and computer whiz Chloe Humphrey must take on the role of detective when she is involved in an accident that is soon after labeled as murder by local police.  With God’s help, Chloe and the victim’s brother, a handsome Amish carpenter, must solve the mystery that is rocking this small Amish town.  USA Today and New York Times best-selling author Shelley Shepard Gray reported she read the first book in this series “in one sitting” and could not wait to read the next!

The second installment in the Appleseed Creek Mystery Series is the novel A Plain Scandal.  Soon after the dust has settled on the “accident thought to be murder” in the first book, we take another thrill-ride with Chloe Humphrey as she attempts to discover who is murdering the Amish and cutting off their hair and beards in Appleseed Creek.  Chloe knows from before that finding the murderer and restoring peace to Appleseed Creek is as much her responsibility as anyone else’s in town and she is determined to do so.

It is Christmas time in Amish country, and once again we meet Chloe Humphrey in the final installment of the Appleseed Creek Mystery Series entitled A Plain Disappearance.  Chloe has begun to settle in to her life in Appleseed Creek, and is excited to see where her new relationship with Timothy Troyer will lead.  Unfortunately, it leads to another murder mystery when the couple discovers the body of Amish teenager Katie Lambright while on their first date.  Timothy’s best friend Billy Thorpe is implicated in the crime, and it is discovered he has been living in Amish country for the past ten years under a stolen alias.  Now, Chloe and Timothy must find Billy, and either bring him to justice or prove his innocence.

▼▲
Amanda Flower is an academic librarian for a small college in Ohio and grew up visiting the state’s Amish Country with her family. Her 2010 debut, Maid of Murder, received an Agatha Award nomination for Best First Novel.

▼▲
I'm the author/artist and I want to review Amanda Flower's Appleseed Creek Trilogy: A Plain Death, A Plain Scandal, A Plain Disappearance / Digital original - eBook.
Back
×
Back
×