Skip to main content
Apples of Gold
By: Denise Jeter
Stock No: WW793914 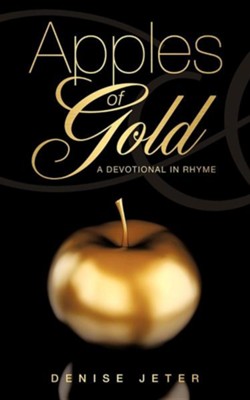 ▼▲
I grew up right outside Houston, Texas, never knowing who the Lord Jesus was or the extent of what he could do, until the ripe old age of thirty three, when I meet him in a prayer of desperation. From that point on he has taken me on a journey of spiritual warfare and discovery of truth that I would not have believed were possible had it not happened to me. I had looked for fulfillment in the vices of the world and came up empty, but I thank God that when I ran out of options and admitted defeat there was someone there to catch me. It was none other than the Lord Jesus Christ himself, who had been waiting to see that glorious white flag of surrender. I take no credit whatsoever for the birth or writing of this book, It was birthed in prayer by the Lord himself and he has been beside me writing the words and selecting the scriptures ever since. He explained this to me in one verse of scripture, which I take great pleasure in sharing with you now. Second Timothy 1:9 "Who hath saved us, and called us with an holy calling, not according to our works, but according to his own purpose and grace, which was given us in Christ Jesus before the world began." Proverbs 25:11 "A word fitly spoken is like apples of gold in pictures of silver." People need nourishment We're often told But more than that They need "Apples of Gold" A word fitly spoken Can set a soul free From all of the lying Done by our enemy Thus the title Of my little book Which I pray brings you blessings When in it you look

▼▲
I'm the author/artist and I want to review Apples of Gold.
Back