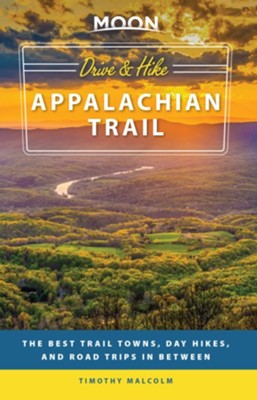 ▼▲
Whether you're stopping for a day trek or taking a weekend getaway, hit the road and hit the legendary trail with Moon Drive & Hike Appalachian Trail.
With Moon Drive & Hike Appalachian Trail's practical tips and local know-how, you're ready to lace up your hiking boots, pick a trailhead, and embark on your adventure.
Looking to explore more of America on wheels? Try Moon Nashville to New Orleans Road Trip. Doing more than driving through? Check out Great Smoky Mountains National Park or Moon Carolinas & Georgia.

▼▲
Timothy Malcolm was born in inner-city Philadelphia and was forever a big city kid. He hadn't even taken an actual hike, let alone spend one night outdoors, until he moved to the Hudson Valley of New York, home to rolling hills, mountain ranges that slice across the terrain, and swimming holes that you absolutely have to find. In this playground Timothy went on his first "hike," which may have been a half-mile into unmarked woods. Since, he's summited peaks throughout New York and New England, along the Appalachian Trail, and in national parks like Acadia, Rocky Mountain, and Olympic.
These days, Timothy lives in Houston, working as the dining editor for Houstonia magazine. When he's not eating his way through Space City, he's enjoying a cold beer, watching baseball, and looking for every opportunity to get out and stretch his legs. You might have also read his work in Backpacker, October, Paste, The Hardball Times, Chronogram, Hudson Valley Magazine, and Orange Magazine.

▼▲
I'm the author/artist and I want to review Moon Drive & Hike Appalachian Trail: The Best Trail Towns, Day Hikes, and Road Trips In Between - eBook.
Back
Back