Skip to main content
The Apostle Paul: His Life, Thought, and Letters
By: Stanley E. Porter
Stock No: WW841148 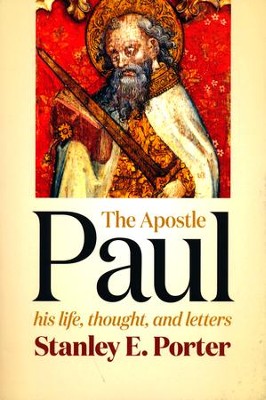 The Apostle Paul: His Life, Thought, and Letters

In The Apostle Paul: His Life, Thought, and Letters, professor Stanley Porter takes readers through a comprehensive introduction to the apostle Paul, devoting serious consideration both to the background and major contours of Paul's thought and to the unique contributions of each of his letters.

The Apostle Paul: His Life, Thought, and Letters begins with an introduction to the Pauline tradition, as well as an overview of the basics of Paul's life, chronology of his ministry, and numerous imprisonments. Porter then discusses the background to Paul's thought, examining some of the major themes of his writings and addressing issues concerning the Pauline epistles, such as pseudonymity and canon.

Finally, readers are launched into all thirteen of Paul's letters individually, placing them within their historical contexts and examining critical issues relating to the content and interpretation of each letter. The result is a thorough, balanced treatment of one of the most important figures in Christianity.

"This volume is a remarkable synthesis of Stanley Porter's extensive work on the background, setting, and content of Paul's letters. Making it clear that historical investigation still counts, Porter addresses a whole array of debates on Paul and his letters with careful and measured judgments. Here is an in-depth introduction to Paul from which both a beginning student and an advanced scholar can profit."  —Mark A. Seifrid, Concordia Seminary, St. Louis

"In this well-organized and accessibly written book, noted Pauline scholar Stanley Porter surveys both Paul's letters and traditional introductory questions surrounding them. Although Porter is as brilliantly independent as usual and many of his own conclusions are traditional, he presents fairly the arguments for various positions, enabling critical readers to reach their own conclusions."  —Craig S. Keener, Asbury Theological Seminary

"Stan Porter's work on Paul and his letters represents scholarship at its best. Porter assesses the evidence independently and from a fresh perspective. . . . A tremendous resource for scholars, teachers, pastors, and students." —Thomas R. Schreiner, Southern Baptist Theological Seminary

"This book showcases Porter's ability to integrate history and interpretation. A very satisfying study of Paul's ministry and letters, this learned work will become a standard in the field of Pauline studies."  —Craig A. Evans, Houston Baptist University

▼▲
I'm the author/artist and I want to review The Apostle Paul: His Life, Thought, and Letters.
Back
Back