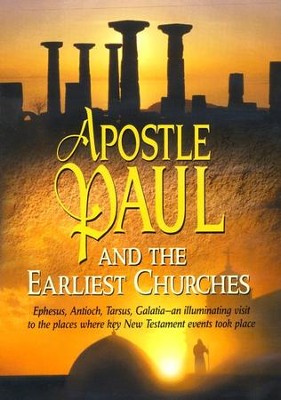 ▼▲
Walk along the winding goat paths and sandy coastlines the apostle Paul once trod in Anatolia (modern Turkey). Witness the miracles he performed, the difficulties he faced, and the persecution he endured during the birth of Christianity. Features historical and religious background information; animated 3-D maps; and archaeological treasures including mosaics, statues, amphitheaters, and more. Approx. 48 minutes.

▼▲
This Christian documentary film contains an archaeological treasury: mosaics, frescoes, statues, amphitheaters, agoras, temples and more. The historical, religious, and archaeological background of each Anatolian region in which Paul preached the gospel is explained. Yet Apostle Paul is more than an archaeological or historical survey; this production's reenactment of the miracles Paul performed, the difficulties Paul encountered, and the persecution Paul faced beckons the viewer to experience with the Apostle himself the birth of the Christian church.

The film's archaeological emphasis is enhanced by 3D animated maps and footage of Antioch on the Orontes, Pisidian Antioch, Ephesus, Tarsus, and other cities important to Paul's ministry. Significant artifacts from a variety of Turkish museums are also discussed.

▼▲
I'm the author/artist and I want to review Apostle Paul and the Earliest Churches, DVD.
Back
×
Back
×