We are OPEN and SHIPPING - click here for shipping estimates
PRE-SUMMER CYBER SALE EXTENDED thru 6/1 ~ Over 2,500 items up to 90% off
The Apostasy That Wasn't: The Extraordinary Story of the Unbreakable Early Church
By: Rod Bennett 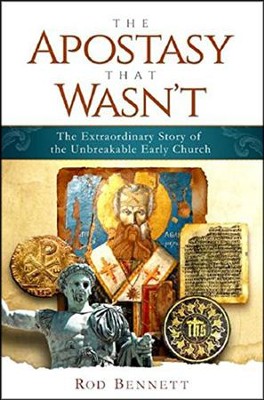 The Apostasy That Wasn't: The Extraordinary Story of the Unbreakable Early Church

In The Apostasy that Wasn't, Rod Bennett follows up his bestseller Four Witnesses with an account of the historical events that led him out of his own belief in apostasy theory and into the Catholic Church. With the touch of a master storyteller, he narrates the drama of the early Church's fight to preserve Christian orthodoxy intact even as powerful forces try to smash it to pieces.

▼▲
The theory goes like this: Just a few centuries after Christ's death, around the time the Roman Empire converted to Christianity, the true Faith suffered a catastrophic falling-away, so obscured by worldliness and pagan idolatry, kicking off the Dark Ages of Catholicism, that Christianity required a complete reboot. This theory is popular]] but it's also fiction. This idea of a "Great Apostasy" is one of the cornerstones of American Protestantism, along with Mormonism, the Jehovah's Witnesses, and even Islam. Countless millions today profess a faith built on the assumption that the early Church quickly became broken beyond repair, and needed restoration to the "pure" teaching of Jesus and the apostles. Amid imperial intrigue, military menace, and bitter theological debate, a hero arises in the form of a homely little monk named Athanasius, who stands against the world to prove that there could never be a Great Apostasybecause Jesus promised his Church would never be broken With the touch of a master storyteller, Rod Bennett narrates the drama of the early Church's fight to preserve Christian orthodoxy, while powerful forces try to smash it.

▼▲
I'm the author/artist and I want to review The Apostasy That Wasn't: The Extraordinary Story of the Unbreakable Early Church.
Back
×