Skip to main content
The First Apology, the Second Apology, Dialogue with Trypho, Exhortation to the Greeks, Discourse to the Greeks, the Monarchy of the Rule of God
Translated By: Thomas B. Falls D.D.
By: Saint Justin Martyr
Stock No: WW215525 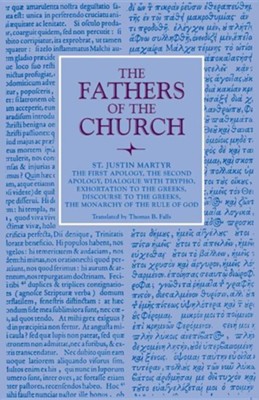 Translated By: Thomas B. Falls D.D.
By: Saint Justin Martyr
More in Fathers of the Church Patristic Series
Catholic University of America Press / 1965 / Paperback
Write a Review
In Stock
Stock No: WW215525
Buy Item Our Price$45.00
In Stock
Quantity:
Stock No: WW215525
Catholic University of America Press / 1965 / Paperback
Quantity:
Add To Cart
of These in Your Cart

▼▲
St. Justin Martyr is known as the oustanding apologist of the second century. While the Apostolic Fathers like St. Clement of Rome, St. Ignatius of Antioch, and St. Polycarp had addressed members within the Christian fold, St. Justin is considered to be the first prominent defender of the Christian faith against non-Christians and the enemies of the Church. The chief sources for the uncertain and meager chronological data of Justin's life are his own writings, the two Apologies and the Dialogue with Trypho. The circumstances leading up to his conversion are recorded in the first eight chapters of the Dialogue, and the events surrounding his death are reported in the Acta SS. Justini et Sociorum, an authentic source of the latter part of the second century. Historians place his birth in the beginning of the second century (ca. 100-110 A.D.) at Flavia Neapolis (today Nablus) in Samaria. Although St. Epiphanius calls him a Samaritan, and he himself refers to his people as Samarians, Justin was not Jewish in either race or religion. His family was rather of pagan and Greco-Roman anscestry. They had come as colonists to Flavia Neapolis during the reign of Titus (79-81 A.D.), the son of Flavius Vespasian (69-79), who had built this city and had granted its inhabitants the privileges of Roman citizens. Obviously, the parents of Justin had considerable means and could afford to give their son an excellent education in the pagan culture of the day. Young Justin had a keen mind, was inquisitive by nature and endowed with a burning thirst for learning. He tried to broaden his knowledge further by extensive travels. Driven by an inner urge and a profound inclination for philosophy, he subsequently frequented the schools of the Stoics, the Peripatetics, the Pythagoreans, and the Platonists. He set out to reach the truth; to gain a perfect knowledge of God was his greatest and only ambition. Dissatisfied with the Stoics and Peripatetics, he tells us of finding temporary peace in the philosophy of the Platonists: 'the perception of incorporeal things quite overwhelmed me and the Platonic theory of ideas added wings to my mind, so that in a short time I imagined myself a wise man. So great was my folly that I fully expected immediately to gaze upon God.'

▼▲
I'm the author/artist and I want to review The First Apology, the Second Apology, Dialogue with Trypho, Exhortation to the Greeks, Discourse to the Greeks, the Monarchy of the Rule of God.
Back