Skip to main content
SPRING CYBER EVENT STARTS NOW: And it's a really BIG deal! Up to 88% off through 5/24>
Apologetics in the New Age: A Christian Critique of Pantheism
By: David K. Clark, Norman L. Geisler
Stock No: WW447336 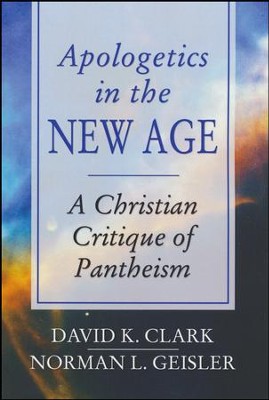 Apologetics in the New Age: A Christian Critique of Pantheism

While many books have successfully defended Christianity against Western rational skepticism, Apologetics in the New Age represents the first serious attempt by evangelical philosophers to answer Eastern pantheism in general and the New Age movement in particular.

Teaming up with David Clark, Norman Geisler, one of evangelicalism's leading apologists, probes the pantheistic worldview and its relationship to the New Age movement. They first provide an exposition of New Age pantheism through the five main examples, before moving on to an evaluation that summarizes and connects common threads and themes, offering a response to these forms from a Christian theistic perspective.

Pantheism, the authors write, "constitutes the soil in which the movement grows." The notion that every person participates in the divine has found fertile expression in contemporary American culture. The American consciousness of the Eastern alternative "has risen rapidly in the last few decades," the authors remind us. "Christian apologists have been caught unaware.... For this reason, we believe that Christian apologists must turn their attention in a new direction by developing new arguments for this New Age."

Geisler and Clark's Apologetics in the New Age aims to deepen the Westerners' understanding and address the conceptual adequacy of a world view that is rapidly gaining the interest and attention of our culture.

▼▲
I'm the author/artist and I want to review Apologetics in the New Age: A Christian Critique of Pantheism.
Back
Back