Skip to main content
SPRING CYBER EVENT STARTS NOW: And it's a really BIG deal! Up to 88% off through 5/24>
End of Apologetics, The: Christian Witness in a Postmodern Context - eBook
By: Myron Bradley Penner
Stock No: WW42261EB 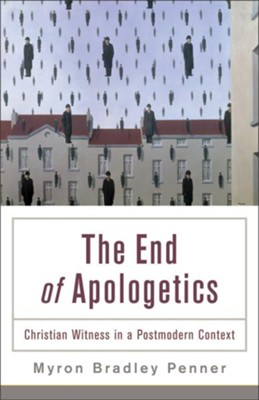 End of Apologetics, The: Christian Witness in a Postmodern Context - eBook

▼▲
In The End of Apologetics Myron Penner argues that "apologetics" as they have been understood up to the postmodern period are no longer valid. Not only this, but he extends the argument to suggest that they tend toward an unbiblical and unchristian form of Christian witness and do not have the ability to attest truthfully to Christ in our twenty-first century context. He believes Christians need an entirely new way of conceiving the apologetic task.

This provocative text critiques modern apologetic efforts and offers a concept of faithful Christian witness that is characterized by love and grounded in God's revelation. Penner seeks to reorient the discussion of Christian belief, change a well-entrenched vocabulary that no longer works, and contextualize the enterprise of apologetics for a postmodern generation.

▼▲
The modern apologetic enterprise, according to Myron Penner, is no longer valid. It tends toward an unbiblical and unchristian form of Christian witness and does not have the ability to attest truthfully to Christ in our postmodern context. In fact, Christians need an entirely new way of conceiving the apologetic task.

This provocative text critiques modern apologetic efforts and offers a concept of faithful Christian witness that is characterized by love and grounded in God's revelation. Penner seeks to reorient the discussion of Christian belief, change a well-entrenched vocabulary that no longer works, and contextualize the enterprise of apologetics for a postmodern generation.

▼▲
Myron Bradley Penner (PhD, University of Edinburgh) is pastor of Trinity International Church in Santa Cruz de la Sierra, Bolivia. He previously taught at Prairie College and Graduate School and served as a human development worker. He is the editor of Christianity and the Postmodern Turn and coauthor of A New Kind of Conversation.

▼▲
This book is quite accessible and passionately committed to Jesus Christ and his work in our world. Penner shows us that the modern age is ending and that the apologetics attached to that age cannot sustain lives of discipleship and witness to the gospel. But the real work of this book is to show us the way forward in faithfulness with a passion that makes us alive in Christ and fully present in the world for its redemption. This is an edifying work that builds us up in the hope and love of the gospel.
-Jonathan R. Wilson,
Carey Theological College

Speaking as a Roman Catholic and something of a Thomist, I welcome Dr. Penner's meticulous and persuasive exposure of the kind of rationalistic apologetics that unwittingly make Christian faith quite unbelievable. A pleasure to read!
-Fergus Kerr,
University of Edinburgh

In this book Myron Penner challenges many of the intuitions and assumptions that have shaped traditional Christian thought and invites us to rethink them for the sake of the gospel. In doing so he offers a fresh perspective on the nature of Christian witness that has the potential to spark a revitalization of the church and its proclamation of the good news revealed in Jesus Christ.
-John R. Franke,
Yellowstone Theological Institute

Penner's devastating critique of what passes for the 'defense' of Christianity in the evangelical worldview in today's increasingly hostile intellectual environment should be a rousing wake-up call for all seminary professors and students as well as pastors. Penner dissects the obsolescence, morbidity, and structural dysfunctionality of standard evangelical models of apologetics like a skilled forensic analyst. At the same time, he offers an alternative that makes eminent sense in present-day culture while coming across as highly credible from both a philosophical and biblical standpoint.
-Carl Raschke,
University of Denver

'Is the cross, then, an argument?' That pointed question from Nietzsche, with which this work begins, displays an insight into the gospel that its rationalist Christian defenders never attain, as Penner shows with sharp and devastating clarity. Joining his voice to the prophetic words of Kierkegaard, Penner calls us to the logos of the cross, to that form of reason whose beginning is crucifixion and whose end is the humble service of the neighbor. This book makes a crucial intervention: for those who have knelt too long before the idol of apologetics or been wounded by it, their healing can begin here.
-Douglas Harink,
The King's University College

What is the 'end' of apologetics--defeat or conversion? Myron B. Penner's provocative critique of the 'rhetorical violence' of the 'apologetics industry' needs to be heard especially by apologists, as does his radically alternative model of 'edifying prophetic witness'--a witness that calls for conversation rather than debate and for Christians to embody the truth they profess in their lives rather than merely prove propositions through their arguments.
-Robert MacSwain,
Sewanee: The University of the South

Myron Bradley Penner has written that rarest of books: the book that needs to be written. He exposes the fatal flaws of modern Christian apologetics, putting words to the unease many Christian theologians and philosophers have long felt about the apologetic enterprise. But the importance of Penner's book is not merely in its critique of apologetics; even better, it lights a way forward for authentic Christian witness in a postmodern age.
-Michael W. Pahl

▼▲
I'm the author/artist and I want to review End of Apologetics, The: Christian Witness in a Postmodern Context - eBook.
Back
Back