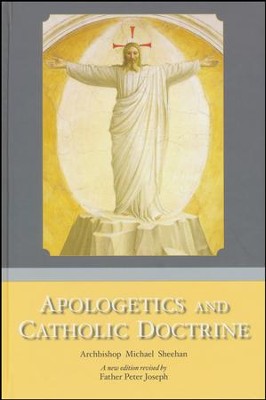 Used to teach the Faith to generations of English-speaking Catholics around the world for more than four decades, Apologetics and Catholic Doctine is known for its outstanding clarity, persuasiveness and comprehensiveness. Originally published in 1918 by Archbishop Michael Sheehan, this new edition has been revised by Father Peter Joseph.

For years, this book gave to many young Catholics the support and knowledge to sustain their Faith throughout their lifetime. They knew the Catholic Religion, and they knew the reasons for it. The structure and sequence of the argument of Sheehan's Apologetics have a unique clarity and logical force. The exposition of the deposit of faith in Catholic Doctrine is clear and thorough. Objections are faced openly and honestly. Hardcover with ribbon marker.

▼▲
I'm the author/artist and I want to review Apologetics and Catholic Doctrine - revised.
Back
×
Back
×