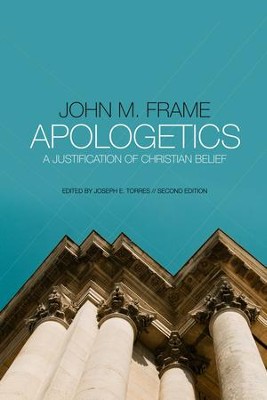 Apologetics: A Justification of Christian Belief

▼▲
Renowned theologian John Frame sheds much-needed light on the message and method of genuinely Christian apologetics in this landmark title. He insightfully examines apologetics in terms of proof, defense, and offense and clarifies the relationships of reason, proofs, and evidences to faith, biblical authority, and the lordship of Christ.

Two subjects of particular note are Frame's fresh look at probability arguments and a stimulating investigation into the problem of evil.

Some of the most valuable elements of this book are Frame's extensive use of Scripture and his presentation of specific lines of argument. There is also a model dialogue in the concluding chapter that shows how these lines of argument work in conversation.

This is an extensively redeveloped and expanded version of Frame's previous work, Apologetics to the Glory of God.

▼▲
Over the last several decades, few books have been so helpful, to so many, for so long as Apologetics to the Glory of God by John Frame. I eagerly welcome the 20th-anniversary edition of this important book. As apologetics takes on an even greater significance for every believer, I can only hope that the influence and impact of this book will spread far beyond even its original publication. This is a book that, twenty years after its initial publication, is even more timely­and that is a rare achievement. -- R. Albert Mohler Jr., President, The Southern Baptist Theological Seminary, Louisville, Kentucky

“If I were asked to list the top three books that have had the greatest impact on me as a Christian thinker, John Frame’s Apologetics to the Glory of God would undoubtedly be one of them. It brought about a paradigm shift—one might even say a ‘Copernican revolution’—in my understanding not only of apologetics but of all other intellectual endeavors as a Christian. Ever since then, it has been the first book I recommend to those looking for an introduction to Christian apologetics, and it is required reading in my apologetics classes. I’m therefore delighted to recommend this updated and expanded twentieth-anniversary edition, which incorporates additional material by Dr. Frame, as well as many helpful annotations by Joseph Torres. Soli Deo Gloria!” -- James N. Anderson, Professor of Theology and Philosophy, Reformed Theological Seminary, Charlotte

“This book is as vital as when it first appeared. John Frame manages to tackle the most difficult problems facing a Christian who endeavors to defend the faith: the nature of evil, world religions, the use of evidences, and much more. And he does so with grace, theological acumen, and an enviable straightforwardness—rare for apologists who are at home with the principal philosophical issues of the day. Extraordinarily profitable volume from a veteran Christian thinker.” -- William Edgar, Professor of Apologetics, Westminster Theological Seminary

“For decades, John Frame has given himself to the church, to his students, and to meticulous thinking and the rigorous study of the Bible. He winsomely, patiently, and persuasively contends for the gospel, and brings together a rare blend of big-picture thinking, levelheaded reflection, biblical fidelity, a love for the gospel and the church, and the ability to write with care and clarity.” -- John Piper, Chancellor, Bethlehem College and Seminary; Founder and Teacher, www.desiringGod.org

▼▲
I'm the author/artist and I want to review Apologetics: A Justification of Christian Belief.
Back
Back