Skip to main content
ENDS TODAY! FREE U.S. SHIPPING ON ORDERS $35+ WITH CODE BSB2022 Details >
Apocalyptic and the Future of Theology: With and Beyond J. Louis Martyn - eBook
Edited By: Joshua B. Davis, Douglas Harink
Stock No: WW111528EB 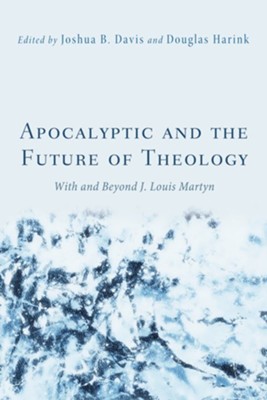 Apocalyptic and the Future of Theology: With and Beyond J. Louis Martyn - eBook

▼▲
Ernst Kasemann famously claimed that apocalyptic is the mother of Christian theology. J. Louis Martyn's radical interpretation of the overarching significance of apocalyptic in Paul's theology has pushed Kasemann's claim further and deeper. Still, despite the recognition that apocalyptic is at the core of New Testament and Pauline theology, modern theology has often dismissed, domesticated, or demythologized early Christian apocalyptic. A renewed interest in taking apocalyptic seriously is one of the most exciting developments in recent theology. The essays in this volume, taking their point of departure from the work of Martyn (and Kasemann), wrestle critically with the promise (and possible peril) of the apocalyptic transformation of Christian theology. With original contributions from established scholars (including Beverly Gaventa, Stanley Hauerwas, Robert Jenson, Walter Lowe, Joseph Mangina, Christopher Morse, and Fleming Rutledge) as well as younger voices, this volume makes a substantial contribution to the discussion of apocalyptic and theology today. A unique feature of the book is a personal reflection on Ernst Kasemann by J. Louis Martyn himself.

▼▲
Joshua B. Davis (PhD, Vanderbilt) has been Visiting Assistant Professor of Catholic Studies at the University of Illinois Urbana-Champaign and has taught courses for the Loyola University (Chicago) Institute for Pastoral Studies. His research and writing interests include modern Roman Catholic theology, Continental philosophy, and the doctrines of grace, creation, and divine and human agency. Douglas Harink is Dean of the Faculty of Arts and Professor of Theology at The King's University College in Edmonton, Canada. He is the author of Paul among the Postliberals (2003) and 1 & 2 Peter (2009) in the Brazos Theological Commentary on the Bible, and the editor of Paul, Philosophy and the Theopolitical Vision (2010) in the Theopolitical Visions series published by Cascade.

▼▲
I'm the author/artist and I want to review Apocalyptic and the Future of Theology: With and Beyond J. Louis Martyn - eBook.
Back
Back