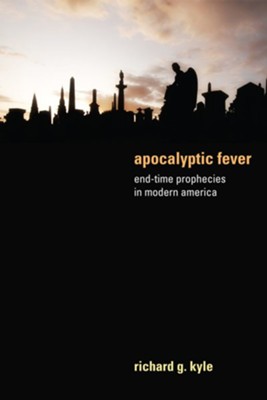 ▼▲
How will the world end? Doomsday ideas in Western history have been both persistent and adaptable, peaking at various times, including in modern America. Public opinion polls indicate that a substantial number of Americans look for the return of Christ or some catastrophic event. The views expressed in these polls have been reinforced by the market process. Whether through purchasing paperbacks or watching television programs, millions of Americans have expressed an interest in end-time events. Americans have a tremendous appetite for prophecy, more than nearly any other people in the modern world. Why do Americans love doomsday? In Apocalyptic Fever, Richard Kyle attempts to answer this question, showing how dispensational premillennialism has been the driving force behind doomsday ideas. Yet while several chapters are devoted to this topic, this book covers much more. It surveys end-time views in modern America from a wide range of perspectives--dispensationalism, Catholicism, science, fringe religions, the occult, fiction, the year 2000, Islam, politics, the Mayan calendar, and more.

▼▲
Richard G. Kyle is a Professor of History and Religion at Tabor College in Hillsboro, Kansas. He has authored nine previous books and ninety articles.

▼▲
I'm the author/artist and I want to review Apocalyptic Fever: End-Time Prophecies in Modern America - eBook.
Back
Back