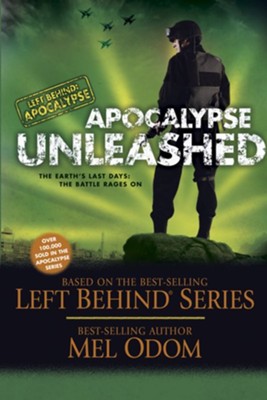 ▼▲
In this a much anticipated conclusion to the Apocalypse series, First Sergeant "Goose" Gander of the United States Army Rangers is in over his head, and he knows it. Trapped by the Rapture in the carnage of Middle Eastern shooting war, far from his wife and kid back home, he's living every day on the edge, afraid each moment might be his last, terrified that he'll never see the people he loves again. The war on the Syrian/Turkish border is heating up, and the opposition armies and the local warlords are skirmishing for power in a no-man's land filled with innocent victims that Goose hopes to protect.

Goose soon discovers elements within his own forces, fearful of his leadership, are determined to bring him down. With everybody gunning for him, Goose is going to need a miracle to pull off his mission. Even as he struggles to believe in the God of miracles, Goose is about to discover the power of redemption and the bulwark of pure faith. And as the Hand of God closes over him and he accepts salvation, Goose Gander will finally find the peace he seeks, even as the war-torn land around him explodes in violence.

▼▲
I'm the author/artist and I want to review Apocalypse Unleashed: The Earth's Last Days: The Battle Rages On - eBook.
Back
Back