Skip to main content
Apocalypse Recalled: The Book of Revelation after Christendom
By: Harry Maier
Stock No: WW34927 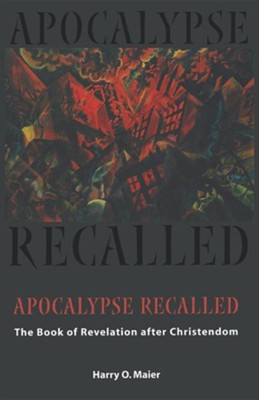 Apocalypse Recalled: The Book of Revelation after Christendom

▼▲
Using a careful exegesis of Revelation against the backdrop of imperial Rome, Maier explores the narrator's literary identity, the sensitive dimensions of the text, and the ambiguous temporal aspects of its past vision of a future time. The result---a powerful document with which to awaken a culturally assimilated church to new imperatives of discipleship. 240 pages, softcover from Augsburg/Fortress.

The Book of Revelation has often been read as a set of endtime scenarios, glorifying a vengeful God and predicting and even fomenting apocalyptic violence. Yet it continues to exert a profound hold on the dreams and visions, fears and nightmares of our contemporary, first-world, secular culture.

Harry Maier insists that, however much one is skeptical of its misuse or awed by its influence, Revelation still harbors a powerful and important message for Christians today. His fascinating book, erudite yet also intensely personal, asks us to recall Apocalypse through a careful exegesis of Revelation's deeper literary currents against the backdrop of imperial Rome. He explores the narrrator's literary identity, the plot or journey of the text, its many ocular and aural dimensions, and the ambiguous temporal dimensions of its "past vision of a future time." Revelation, he believes, "offers an inversion of the violent and militaristic ideals of a first-century Roman Empire by offering a highly ironical political parody of imperial politics and insisting the true power belongs to the hero of the Apocalypse, the Slain Lamb."In the end, Apocalypse Recalled seeks to free the imprisoned John of Patmos and employ his massively influential and controversial text to awaken a sleeping, sidelined, and culturally assimilated church to new imperatives of discipleship.

A creative hypothesis about the literary character of the book

Harry O. Maier is Associate Professor of New Testament Studies, Vancouver School of Theology. He is also author of The Social Setting of the Ministry as Reflected in the Writings of Hermas, Clement, and Ignatius (2002).

▼▲
I'm the author/artist and I want to review Apocalypse Recalled: The Book of Revelation after Christendom.
Back