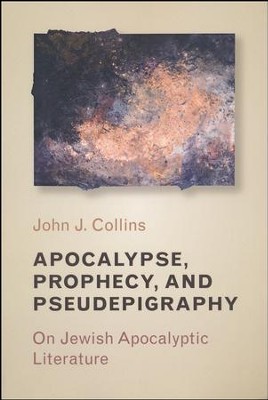 ▼▲
A highly regarded expert on Jewish apocalyptic texts, John J. Collins has written extensively on the subject. Nineteen of his essays written over the last fifteen years, including several previously unpublished contributions, are brought together for the first time in Apocalypse, Prophecy, and Pseudepigraphy.

After an introductory essay that revisits the problem of defining Apocalypse as a literary genre, Collins deals with a number of different topics, including the relationship between apocalypse and prophecy and the troubling ethical issues raised by apocalyptic texts. Collins also examines several specific examples to show the themes and variation present in the genre. Organized in five sections, these thematic essays complement and enrich Collins's well-known book The Apocalyptic Imagination.

▼▲
Journal for the Study of The New Testament Booklist
"Exceedingly valuable. . . . The first-class scholarship, and lucid writing style, that is exhibited here will no doubt continue to assist and inspire others for many years to come."

Lorenzo DiTommaso
— Concordia University, Montr&eacute;al
"No scholar has shaped our understanding of apocalyptic literature more than John J. Collins. This superb new collection covers a wide range of texts and topics, all handled in magisterial fashion. Lucidly argued and meticulously researched, each essay offers a plethora of valuable insights and stimulating interpretations. Highly recommended for biblical scholars, and an absolute must for every specialist of early Judaism."

Michael E. Stone
— Hebrew University of Jerusalem
"Brilliant. . . . Collins's leading scholarship is always adorned with clarity and creativity. The essays gathered here, including several previously unpublished, provide his assessment of the field since the 1970s, dealing lucidly with the major issues, including pseudepigraphy, ethics, and politics. This will become a milestone collection on apocalyptic studies."

Matthias Henze
— Rice University
"Collins has made Second Temple Judaism accessible like few other scholars, offering an authoritative voice that often determines the course of ideas and scholarship in the field. These essays not only provide a marvelous summary of the field at large but also establish a trajectory for future study. An indispensable volume for the student of early apocalyptic literature."

▼▲
I'm the author/artist and I want to review Apocalypse, Prophecy, and Pseudepigraphy: On Jewish Apocalyptic Literature.
Back
Back