Skip to main content
OUR BIGGEST BARGAIN SALE EVER: Over 6,000 deals at never-seen-before prices ~ through 8/23. Shop now >
The Pith of the Apocalypse: Essential Message and Principles for Interpretation - eBook
By: Paul A. Rainbow
Stock No: WW109931EB 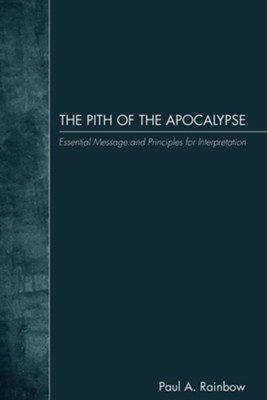 The Pith of the Apocalypse: Essential Message and Principles for Interpretation - eBook

▼▲
To serve God and Christ faithfully in the midst of a pagan society that exalts power, wealth, and pleasure is the tenor of the prophetic summons to the church in the book of Revelation. Unfortunately, this simple message, as potent today as it was at the end of the first century, is often obscured by misguided, if sincere, interpreters. The present book explores the background issues and lays out the principles that inform a sound approach to this enigmatic writing: its historical and cultural setting, its literary structure, its symbolic code, its core theological concepts, its scheme of last things, and its preachable and teachable points. In dialogue with dispensationalism on the one hand and with the skeptical criticism of it on the other, The Pith of the Apocalypse derives clues for cracking the Apocalypse from the book itself, viewed against the sweep of the biblical prophetic tradition that flowed into it, through the lens of methods widely accepted in mainstream New Testament scholarship. Readers will return to the book of Revelation itself with enhanced confidence, penetration, and understanding.

▼▲
Paul A. Rainbow is Professor of New Testament at Sioux Falls Seminary in South Dakota. He studied theology at Oxford University, Harvard University, and Trinity Evangelical Divinity School. Rainbow is the author of The Way of Salvation (2005) and of a number of articles in journals and anthologies.

▼▲
I'm the author/artist and I want to review The Pith of the Apocalypse: Essential Message and Principles for Interpretation - eBook.
Back
Back