Apocalypse as Holy War: Divine Politics and Polemics in the Letters of Paul
By: Emma Wasserman 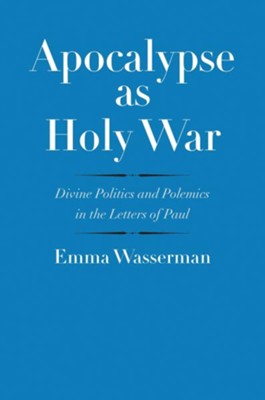 Apocalypse as Holy War: Divine Politics and Polemics in the Letters of Paul

▼▲
Prevailing theories of apocalypticism assert that in a world that rebels against God, a cataclysmic battle between good and evil is needed to reassert God’s dominion. Emma Wasserman, a rising scholar of early Christian history, challenges this interpretation and reframes Paul’s apocalyptic texts as myths about politics in the world of divinity.

Wasserman argues that the most dominant historical-critical theories about Christian apocalypticism are ahistorical and tend to work with apologetic formulations of Christ’s victory and the uniqueness of Christianity. Assessing Paul’s claims about immanent war, divine enemies, and the transformation that will accompany Christ’s return, Wasserman sees him as envisioning a single, righteously ruled cosmic kingdom, the true nature of which will soon be revealed to all. A major scholarly contribution that ranges across Mediterranean and West Asian religious thought, this volume has broad implications for understanding Paul’s myth of heroic submission as well as his most distinctive ethical teachings.

▼▲
Emma Wasserman is an associate professor of religion at Rutgers University and the author of Death of the Soul in Romans 7. She specializes in early Christian history and maintains a particular focus on the letters of Paul and on ancient ethics and cosmology.

▼▲
"Emma Wasserman. . . provides an erudite and original study of apocalyptic in Paul and Jewish literature contemporary with Paul’s thought world. . . . Wasserman’s careful analysis of a range of texts challenges the idea of a uniform end-of-world drama."—John R. Barker, Bible Today
"Valuable . . . compelling . . . informative . . . Wasserman does a fantastic job of presenting new ways of understanding apocalyptic thought."—Scot Miller, The Paul Page
"Emma Wasserman offers a fascinating survey of antiquity’s god-congested cosmos and a lucid analysis of the myriad and inconsistent ways that ancient Jews – and, particularly, Paul – coped with it. Brilliant and original, Apocalypse as Holy War truly puts Paul in his place."—Paula Fredriksen, author of Paul: The Pagans’ Apostle
"By setting Paul within a vast company of ancient mythmakers who saw the cosmos as a complex political order, Wasserman enables us to read his letters in an entirely fresh way. Truly impressive."—Wayne A. Meeks, Yale University
"A must read, Wasserman’s nuanced reappraisal of the sources and scholarship builds into a comparative contextualization of apocalyptic thought and brilliant reframing of the thought’s role in Paul’s letters."—Stanley Stowers, Brown University
"Emma Wasserman subjects to a learned and insightful critique the common claim that the apostle Paul is deeply indebted to 'apocalyptic' thought, revealing not a widespread belief in a fundamental dualism or an expectation of cosmic war between powers of good and evil. What emerges instead is political myth making, interlaced with popular philosophy, framing the world as a complex hierarchy with various powers in tensive and sometimes unruly array. Wasserman’s carefully argued study will no doubt provoke serious debate about how to better understand the ways in which influential early Christians understood their place in the cosmos."—Harold W. Attridge, Yale Divinity School
"It is difficult to produce a volume on a major biblical book and say something new, but Wasserman has done that. This study provides a way of understanding more precisely what ancient apocalyptic texts meant, how they functioned, and how Paul used apocalyptic themes in his letters. This book will make a very significant contribution to the field."—Lawrence Wills, Brown University

▼▲
I'm the author/artist and I want to review Apocalypse as Holy War: Divine Politics and Polemics in the Letters of Paul.
Back
×