Skip to main content
The Apocalypse of Ahmadinejad: The Revelation of Iran's Nuclear Prophet - eBook
By: Mark Hitchcock
Stock No: WW11962EB 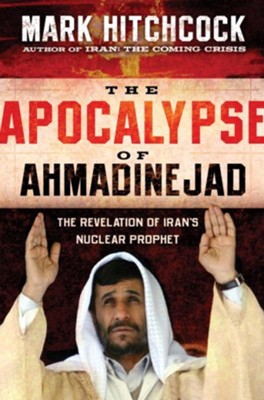 The Apocalypse of Ahmadinejad: The Revelation of Iran's Nuclear Prophet - eBook

▼▲
In this provocative, well-researched expos of the Iranian president, prophecy expert Mark Hitchcock reveals the agenda behind this radical Shiite's regime: to hasten the return of Islam's messiah by ushering in his vision of the apocalypse. What does this mean for the future of the world - and you.

▼▲
He stands only 5-foot-4 and smiles incessantly. But behind that charismatic persona beats the heart of a genocidal terrorist.

Meet the World’s Most Dangerous Man

Ahmadinejad plans to hasten the return of the Islamic messiah
by ushering in his vision of the apocalypse.

His ultimate goal–driven by his fanatical ideology–is to bring the Mahdi, or Twelfth Imam, out of hiding. And he plans to do so by arming his country with nuclear weapons, then exporting the Iranian revolution to the world by destroying Israel and the United States.

But there’s a bizarre twist to Ahmadinejad’s nightmarish intentions: This ardent zealot may well be part of God’s plan to set the stage for a scenario prophesied more than 2,500 years ago. Hitchcock presents compelling evidence that Ahmadinejad’s actions, including his alliances with Russia and many of Iran’s neighbors, have placed his nation–and the world–on a collision course toward the war of Gog and Magog.

Discover the truth about Mahmoud Ahmadinejad, his role in biblical prophecy, and what it means for the world–and you.

▼▲
Mark Hitchcock is one of the most sought-after authorities in biblical prophecy for the current generation. He is the author of fourteen books, including Iran: The Coming Crisis and The Second Coming of Babylon. A graduate of Oklahoma State University and a former lawyer, he holds a Ph.D. from Dallas Theological Seminary and currently serves as pastor of Faith Bible Church in Edmond, Oklahoma. Mark and his wife, Cheryl, are the parents of two sons.

▼▲
“Too few in the West understand just how dangerous Iranian President Mahmoud Ahmadinejad really is. Few truly see him as a rising new Hitler, determined to wipe Israel off the map. Fewer still realize he’s the head of an apocalyptic cult Hell-bent on acquiring nuclear weapons and annihilating the U.S. as well, all to usher in the Islamic Messiah. But Mark Hitchcock gets it. His research is first-rate and his book is a must read.”
Joel C. Rosenberg, New York Times best-selling author of Epicenter

“The Apocalypse of Ahmadinejad will open your eyes to the world’s greatest threat to Israel and the United States. A threat that is growing stronger every day. I highly recommend Mark and this book as a faithful guide to understanding current events in light of God’s wonderful plan of prophecy.”
Tim LaHaye, co-author of the Left Behind series

▼▲
I'm the author/artist and I want to review The Apocalypse of Ahmadinejad: The Revelation of Iran's Nuclear Prophet - eBook.
Back
Back