AP US Government and Politics
By: Michael Zanfordino 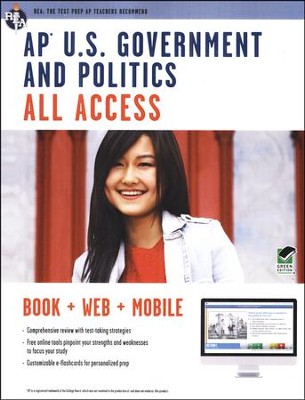 AP US Government and Politics

▼▲
Get the most out of your study time with an exam practice book that takes advantage of current technology! AP US Government and Politics All Access gives you practice opportunities with the book, on the web, and on your mobile device!

The book provides a complete subject review of AP US Government and Politics with important subjects receiving their own sub-chapter heading; brush up on the basics of the constitutional underpinnings of the US, political beliefs and behaviors, political parties, institutions of national government, public policy, civil rights, civil liberties, and more.

Grab your code in the front of the book for access to the online REA Study Center, where you'll find chapter quizzes, mini-tests, and a full-length practice exam that helps to pinpoint your strengths and weaknesses.

Finally, get the flashcard app to practice wherever you happen to be.or simply because you prefer using your phone to using actual physical cards!

Everything you need to prepare for the Advanced Placement® exam, in a study system built around you!

There are many different ways to prepare for an Advanced Placement® exam. What’s best for you depends on how much time you have to study and how comfortable you are with the subject matter. To score your highest, you need a system that can be customized to fit you: your schedule, your learning style, and your current level of knowledge.

This book, and the online tools that come with it, will help you personalize your AP® U.S. Government & Politics prep by testing your understanding, pinpointing your weaknesses, and delivering flashcard study materials unique to you.

REA's All Access system allows you to create a personalized study plan through three simple steps: targeted review of exam content, assessment of your knowledge, and focused study in the topics where you need the most help.

Here’s how it works:

Review the Book:
Study the topics tested on the AP® U.S. Government & Politics exam and learn proven strategies that will help you tackle any question you may see on test day.

Test Yourself and Get Feedback:
As you review the book, test yourself with 6 end-of-chapter quizzes, plus 2 mini-tests. Score reports from your free online tests and quizzes give you a fast way to pinpoint what you really know and what you should spend more time studying.

Improve Your Score:
Armed with your score reports, you can personalize your study plan. Review the parts of the book where you are weakest, and use the REA Study Center to create your own unique e-flashcards, adding to the 100 free cards included with this book.

Visit The REA Study Center for a suite of online tools:
The best way to personalize your study plan is to get frequent feedback on what you know and what you don't. At the online REA Study Center, you can access three types of assessment: topic-level quizzes, mini-tests, and a full-length practice test. Each of these tools provides true-to-format questions and delivers a detailed score report that follows the topics set by the College Board®.

Topic Level Quizzes:
Short, 15-minute quizzes are available throughout the review and test your immediate understanding of the topics just covered.

Mini-Tests:
Two online mini-tests cover what you've studied in each half of the book. These tests are like the actual AP® U.S. Government & Politics exam, only shorter, and will help you evaluate your overall understanding of the subject.

Full-Length Practice Test:
After you've finished reviewing the book, take our full-length practice exam to practice under test-day conditions. Available both in this book and online, this test gives you the most complete picture of your strengths and weaknesses. We strongly recommend that you take the online version of the exam for the added benefits of timed testing, automatic scoring, and a detailed score report

Improving Your Score with e-Flashcards:
With your score reports from the quizzes and tests, you'll be able to see exactly which AP® U.S. Government & Politics topics you need to review. Use this information to create your own flashcards for the areas where you are weak. And, because you will create these flashcards through the REA Study Center, you'll be able to access them from any computer or smartphone.

▼▲
Michael Zanfardino, M.S., is a teacher at Bayside High School in Bayside, New York, where he has taught for the past nine years. He studied at Hofstra University for both his undergraduate degree in history and his master’s degree in social studies education. At Bayside High School he teaches AP® U.S. History and in the past has taught Global History, American History, Economics, and Participation in Government. He has also authored Cliffs Test Prep Regents U.S. History and Government Workbook.


James M. Lutz, Ph.D., is a professor of political science at Indiana University-Purdue University at Fort Wayne, Indiana. Dr. Lutz has taught a variety of courses in American Government, International Relations, and Comparative Politics. He received his Ph.D. from the University of Texas at Austin.


G. Pearson Cross, Ph.D., is head of the Political Science Department at the University of Louisiana at Lafayette. Dr. Cross’s principal areas of teaching are state and local politics, Southern politics, and Louisiana politics.

▼▲
I'm the author/artist and I want to review AP US Government and Politics.
Back
×
Back
×