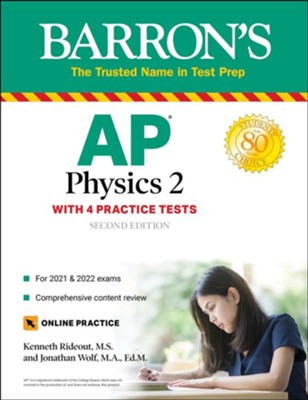 ▼▲
Ken Rideout has a B.S. in Honors Physics from Purdue University and an M.S. in Physics from Carnegie Mellon University. He has been teaching high school physics for more than fifteen years in the Boston area and is currently the science department head at Wayland High School in Wayland, MA.

Jonathan Wolf, M.A., Ed.M., has taught all levels of physics at both the secondary school and college level for over 36 years. He spent 25 of those years teaching physics at Scarsdale High School in Scarsdale, New York and retired from there in 2014. He has taught introductory college physics lectures and introductory college physics labs as a member of the adjunct faculty at Hofstra University, Seton Hall University, and most recently at Fairleigh Dickinson University in Madison, New Jersey.

▼▲
I'm the author/artist and I want to review AP Physics 2: With 4 Practice Tests.
Back