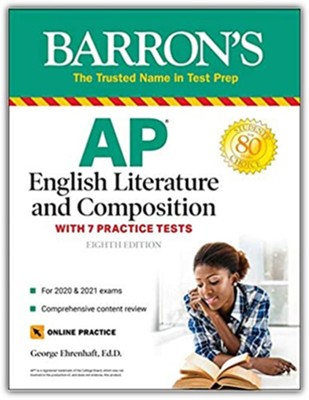 Seven full-length practice tests: four in the book and three online. Additional help when it comes to having students score their own essays in the diagnostic and practice tests. Up-to-date suggested books and plays for writing the literature essay on the May 2020 exam. Additional sample questions with answers covering poetry and prose fiction A review of test topics covering details test takers need to know about poetry, fiction, and drama. Sample student essays with critiques of their strengths and weaknesses. A detailed glossary defining 175 literary and rhetorical terms. Updated guidelines for determining the final AP exam score. 336 pages, softcover. 8th edition. Grades 9-12.

▼▲
George Ehrenhaft has been writing for Barron's for over three decades. During that time he has been the author or co-author of books on the SAT, the ACT, and both the AP English Literature and AP English Language exams. Other titles relate to English grammar and essay writing, especially writing college application essays. He has also written several Barron's Book Notes titles about literature, including The Grapes of Wrath and A Streetcar Named Desire.

Ehrenhaft spent most of his career teaching English in Westchester County, New York, at Fox Lane and Mamaroneck High Schools. He is now a resident of Moraga, California, where he has become a prolific watercolor painter.

▼▲
I'm the author/artist and I want to review AP English Literature & Composition, 8th Edition.
Back