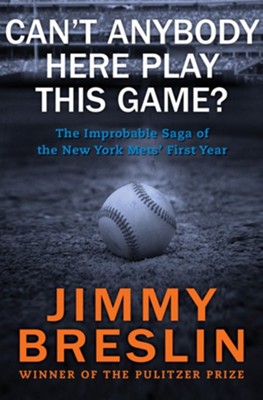 ▼▲
Jimmy Breslin’s nostalgic, rollicking look back at the worst baseball team in history
Five years after the Dodgers and Giants fled New York for California, the city’s National League fans were offered salvation in the shape of the New York Mets: an expansion team who, in the spring of 1962, attempted to play something resembling the sport of baseball.
Helmed by the sagacious Casey Stengel and staffed by the league’s detritus, the new Mets played 162 games and lost 120 of them, making them statistically the worst team in the sport’s modern history. It’s possible they were even worse than that. Starring such legends as Marvin Throneberry—a first baseman so inept that his nickname had to be "Marvelous"—the Mets lost with swashbuckling panache. In an era when the fun seemed to have gone out of sports, the Mets came to life in a blaze of delightful, awe-inspiring ineptitude. They may have been losers, but a team this awful deserves to be remembered as legends.
This ebook features an illustrated biography of Jimmy Breslin including rare photos and never-before-seen documents from the author’s personal collection.

▼▲
Jimmy Breslin (1928–2017) was a Pulitzer Prize–winning journalist and one of most prominent columnists in the United States. Born in Queens, New York, Breslin started working in New York City newsrooms in the 1940s. He began as a columnist in 1963, when he won national attention by covering John F. Kennedy’s assassination from the emergency room in the Dallas Hospital and, later, from the point of view of the President’s gravedigger at Arlington Cemetery. He ran for citywide office on a secessionist platform, befriended and was beaten up by mobsters, and received letters from the Son of Sam during the serial killer’s infamous 1977 spree. Known as one of the best-informed journalists in the city, Breslin’s years of insightful reporting won him a Pulitzer in 1986, awarded for "columns which consistently champion ordinary citizens." Although he stopped writing his weekly column for Newsday in 2004, Breslin continued to write books, having produced nearly two dozen in his lifetime. He passed away in 2017 at the age of eighty-eight.

▼▲
"The book that first put the name Jimmy Breslin in lights." —New York Daily News
"The Theater of the Absurd has not yet—by a country mile—produced anything like the Mets." —The New York Times
"A touching, enjoyable, and interesting addition to anybody’s sports reading list." —Patrick Conway

▼▲
I'm the author/artist and I want to review Can't Anybody Here Play This Game?: The Improbable Saga of the New York Mets' First Year - eBook.
Back
Back