We are OPEN and SHIPPING - click here for shipping estimates
PRE-SUMMER CYBER SALE EXTENDED thru 6/1 ~ Over 2,500 items up to 90% off
Antonino's Impossible Dream
By: Tim McGlen
Illustrated By: Sophia Touliatou 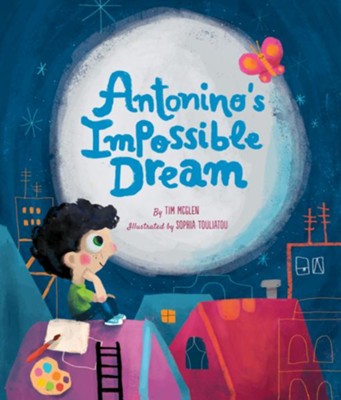 ▼▲
Winner of the Beaming Books Picture Book Writing Contest! Antonino is a young artist who dreams of painting a masterpiece, an impossible dream he calls Friend. When he gets stuck, inspiration comes from an unexpected place. A dreamlike fable about the power of friendship and imagination, Antonino's Impossible Dream is a children's story told in timeless style by author Tim McGlen, with captivating illustrations by Sophia Touliatou.

▼▲
PreS-Gr 2---Antonino, an aspiring artist, dreams of conveying his large, impossible dreams in a celebratory painting. He manages to capture some of those dreams on canvas, but there is one that eludes him called Friend. In frustration, he throws down his brush and hurls paint everywhere. The next morning, gentle as rain, comes the tap-tap of a blind girl rhythmically approaching with the aid of a walking stick. An unexpected friendship forms, as Antonino shows her how to put paint to brush to canvas. The result is the most beautiful thing he has ever seen, a united masterpiece they call Friend. McGlens text is often poetic, suitably paired with Touliatous brash, stylized, unconventional illustrations. Stiff, geometric shapes of sketchy cats, buildings, and windows later launch into cheerful butterflies and brash, haphazard rays of color cascading from his heart. VERDICT A unique book about finding creativity in unlikely places, and the extraordinary power of friendship.---Etta Anton, Yeshiva of Central Queens, NY

▼▲
I'm the author/artist and I want to review Antonino's Impossible Dream.
Back
×
Back
×