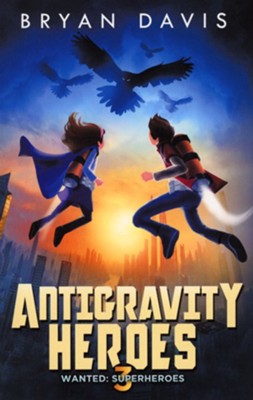 ▼▲
Book #3 in the Wanted: Superheroes series. In previous stories, our heroes, Eddie and Samantha Hertz, faced earthquakes and hypnotized zombie-like people. What could be worse? Birds. Yes, birds. And lots of them. Eagles, hawks, owls, herons, and more. The villain Mephisto has hypnotized tens of thousands of them to do his evil bidding. The situation gets even stranger. Our heroes have to battle gravity itself. Mephisto has stolen antigravity belts that allow him to fly. But the belts have a flaw, and he tries to force Eddie to perfect them. In the meantime, Mephisto uses the hypnotized birds to paralyze the city while he steals millions of dollars. Against all odds, Eddie and Samantha, their mother, their Uncle Milligan, the new Damocles, and the eccentric Dr. Gilbert G. Godwin, work together to battle the hypnotized birds and their controlling master. As usual, the entire world is in danger, and only the Hertz heroes can save it.

▼▲
Bryan Davis is the author of the Dragons in Our Midst, Oracles of Fire, Dragons of Starlight, Tales of Starlight, and Echoes from the Edge series, contemporary/fantasy books for young adults and adults. His books have hit bestseller lists several times, including Eye of the Oracle’s #1 showing on the CBA Young Adult bestseller list in January of 2007. Bryan was born in 1958 and grew up in the eastern U.S. From the time he taught himself how to read before school age, through his seminary years and beyond, he has demonstrated a passion for the written word, reading and writing in many disciplines and genres, including theology, fiction, devotionals, poetry, and humor. Bryan and his wife, Susie, have seven children. He is a graduate of the University of Florida (B.S. in Industrial Engineering). In high school, he was valedictorian of his class and won various academic awards. He continues to expand his writing education by teaching at relevant writing conferences and conventions. Although he is now a full time writer, Bryan was a computer professional for over 20 years.

▼▲
I'm the author/artist and I want to review Antigravity Heroes, #3.
Back