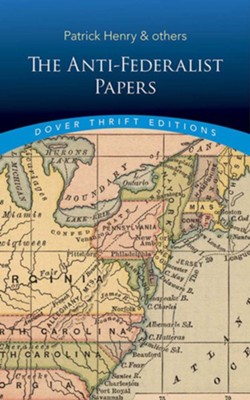 ▼▲
Between the first proposals of a federal Constitution in 1787 and the document’s 1789 ratification, an intense debate raged among the nation's founding fathers. The Federalist Papers — authored by James Madison, Alexander Hamilton, and John Jay — favored the adoption of the Constitution, but other early statesmen opposed its ratification. The latter group, writing under pseudonyms, amassed a substantial number of influential essays, speeches, and letters that warned of the dangers inherent in a powerful central government.
Although never collected in as definitive a form as The Federalist Papers, these statements of opposition appeared in various publications and eventually became known as The Anti-Federalist Papers. Some of their arguments were incorporated into the first ten amendments to the Constitution — the Bill of Rights — but others remained unaddressed. The persuasive and well-argued statements encompassed by this volume continue to provide a valuable and timely perspective on the necessary limits of power.

▼▲
The Anti-Federalist papers were written pseudonymously, but among the most notable are presumed to be Founding Fathers Patrick Henry, George Mason, Richard Henry Lee, James Monroe, George Clinton, and Melancton Smith.

▼▲
I'm the author/artist and I want to review Anti-Federalist Papers, The.
Back
×