Skip to main content
OUR BIGGEST BARGAIN SALE EVER: Over 6,000 deals at never-seen-before prices ~ through 8/23. Shop now >
Who Do I Say That You Are?: Anthropology and the Theology of Theosis in the Finnish School of Tuomo Mannermaa - eBook
By: William Schumacher
Stock No: WW110188EB 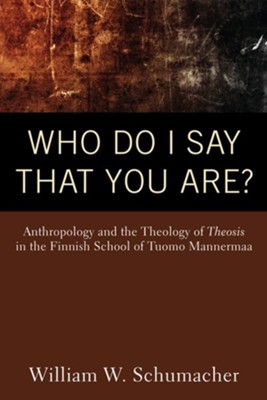 Who Do I Say That You Are?: Anthropology and the Theology of Theosis in the Finnish School of Tuomo Mannermaa - eBook

▼▲
The question of what it means to be a human creature lies at the heart of contemporary wrestling with anthropology, and especially anthropology from a theological perspective. Through both historical and systematic engagement with the so-called Finnish school of Tuomo Mannermaa, this study explores and assesses the anthropological dimension of their theology of theosis, or deification. Mannermaa initiated a minor revolution in Luther studies and in contemporary Lutheran theology by interpreting Luther's doctrine of justification to be a close analog to the Eastern Orthodox doctrine of theosis, but his ecumenical interests led him to minimize or overlook key themes in Luther and sharp distinctions between Luther and Orthodox theologians. Mannermaa's colleague Simo Peura then developed this thesis with specific reference to anthropology in a way reminiscent of the sixteenth-century reformer Andreas Osiander. On closer inspection, the project of Mannermaa and his Finnish colleagues fails to understand adequately both Luther's sources and his own theological development. In this study, a theological anthropology which is more consistent with Luther's theology is developed, an anthropology which is determined by God's address to his human creatures: what God himself says we are, and what he makes us by that word. Such an answer to the anthropological question refuses to flee from creation but instead upholds the complex and paradoxical nature of human beings as creatures, sinners, and saints.

▼▲
William W. Schumacher has lived and taught in Africa, Europe, and North America. He currently serves as Mission Associate Professor of Historical Theology and Dean of Theological Research and Publication at Concordia Seminary in Saint Louis, Missouri.

▼▲
I'm the author/artist and I want to review Who Do I Say That You Are?: Anthropology and the Theology of Theosis in the Finnish School of Tuomo Mannermaa - eBook.
Back
Back