Skip to main content
SPRING CYBER SALE: The sale you've been waiting for! Up to 85% off through 5/25>
Anthony Burns
By: Virginia Hamilton
Stock No: WW39976 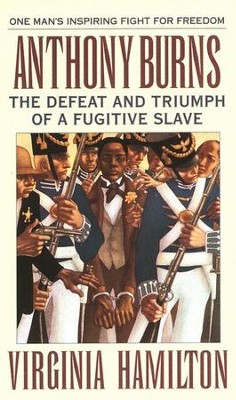 ▼▲
Of great historical importance, the trial and life of Anthony Burns is a riveting story that highlights the battle abolitionists fought against southern slavers. Originally a slave in Virginia, Burns escaped to Boston, where he was captured and imprisoned according to the Fugitive Slave Act; however, the abolitionist community of Boston rallied to his aid, working together in the hopes that freedom would prevail. 193 indexed pages, softcover.

▼▲
Now in Laurel-Leaf, Virginia Hamilton's powerful true account of the sensational trial of a fugitive slave.

The year is 1854, and Anthony Burns, a 20-year-old Virginia slave, has escaped to Boston. But according to the Fugitive Slave Act, a runaway can be captured in any free state, and Anthony is soon imprisoned. The antislavery forces in Massachusetts are outraged, but the federal government backs the Fugitive Slave Act, sparking riots in Boston and fueling the Abolitionist movement.

Written with all the novelistic skill that has won her every major award in children's literature, Virginia Hamilton's important work of nonfiction puts young readers into the mind of Burns himself.

▼▲
Virginia Hamilton's many awards include the Newbery Medal and National Book Award for M.C. Higgins the Great; the Coretta Scott King Medal for The People Could Fly; and the Hans Christian Andersen Award for the body of her work.

"Beautifully written . . . a riveting reality tale whose legacy, even now, is not finished." -- The New York Times Book Review

▼▲
I'm the author/artist and I want to review Anthony Burns.
Back
Back