Answers to Prayer
By: George Mueller 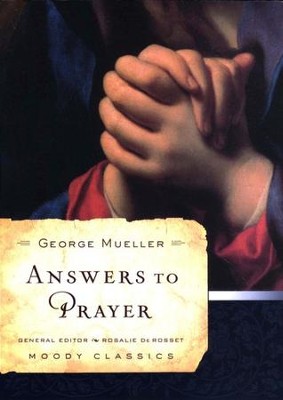 ▼▲
Underscoring the pivotal role that classic literature plays in the shaping of our lives, Moody Press has introduced Moody Classic Series, celebrating Christian books which have stood the test of time.
George Mueller's "Answers to Prayer" is one inthis series, featured here with fine art cover design; edited by Rosalie DeRosset. 140 pages; with notes.

When George Mueller could not get it out of his mind to open a house for orphans in late 1835, he purposed to do so "that God might be magnified by the fact that the orphans under my care are provided with all they need, only by prayer and faith."

For over sixty years George Mueller wrote down the details of the Lord's provision. Thousands of orphans depended solely on Mueller, and Mueller depended solely on the Lord. Prayer is an urgent matter that always yields crucial results. Through his narrative account, Mueller reveals how powerful and spiritually rewarding prayer can be in your life.

▼▲
GEORGE MUELLER (1805-1898), evangelist and philanthropist in England, was a man of prayer and strong faith who depended wholly on God for his temporal and spiritual needs. During his time serving as pastor at a church in Bristol, England, his famous work with the orphans began when two young children were thrown upon the church's care. Mueller resolved never to tell anyone what his needs were. He told them to God and confidently expected them to be met. Over his life, he handled more than $8 million, although his own worldly possessions were valued at about $800 at his death. He is author of the book Answers to Prayer.

▼▲
I'm the author/artist and I want to review Answers to Prayer.
Back
×
Back
×