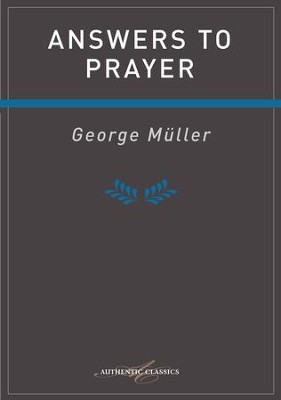 ▼▲
Discover the wonders of effective prayer from one of the greatest prayer warriors ever! George Mueller (1805-1898) dared to take God at his word, and on the basis of prayer alone was able to establish orphanages and schools that saved over 10,000 children from the horrors of poverty in Victorian England.

▼▲
George Mller was born in Kroppenstaedt, Prussia, on September 27, 1805. He was the son of a tax collector and, before he became a Christian, he had the reputation of a liar and a thief. After accepting Christ as his personal Savior, he was used in remarkable ways to provide for over 10,000 orphans during his lifetime. He never went into debt or asked anyone to supply his needs. He trusted in God to provide for him and for the orphans, and God never failed to do so. In 1834, he established the Scriptural Knowledge Institution for Home and Abroad. Its objectives were to: assist day schools and a

▼▲
I'm the author/artist and I want to review Answers To Prayer - eBook.
Back
Back