Skip to main content
SPRING CYBER EVENT STARTS NOW: And it's a really BIG deal! Up to 88% off through 5/24>
Answers Book For Teens Volume 2: Your Questions, God's Answers - eBook
By: Bodie Hodge, Tommy Mitchell, Ken Ham
Stock No: WW30702EB 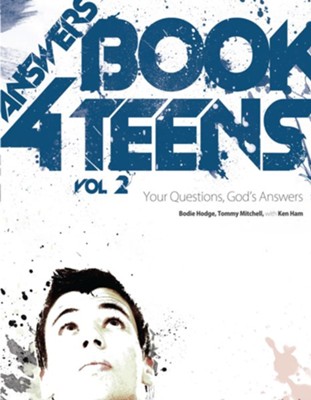 ▼▲
Building and keeping a Biblical worldview is counter-cultural and antithetical to most commonly taught science curricula. Extending the success of Answer Book for Teens, Volume 1, here 15 additional difficult issues are presented in a simple Q-and-A format with contemporary graphics and images. Contains conservative Christian creationist answers to difficult questions such as:

Our youth are on the front lines of a war of the worldviews. To help them cement a biblical worldview, the experts at Answers in Genesis offer the Answers Books for Teens, volumes 1 and 2.  In volume 2, teens will find answers to 15 questions relevant to today’s culture including:

Answers to these issues are paired with dynamic designs created to appeal to today’s student. This 96 page book makes a great study for youth ministries, small groups, and family devotions. It will be an excellent reference for church and family libraries.

▼▲
I'm the author/artist and I want to review Answers Book For Teens Volume 2: Your Questions, God's Answers - eBook.
Back
Back