How I Know God Answers Prayer: Miracles from the Mission Field of Jonathan Goforth - eBook
By: Rosalind Goforth 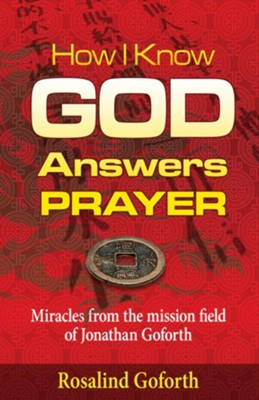 How I Know God Answers Prayer: Miracles from the Mission Field of Jonathan Goforth - eBook

▼▲
"These incidents of answered prayer are not more wonderful or more worthy of record than multitudes the world over could testify to, but they are written and sent out simply and only because I had to write them or disobey God."—Rosalind Goforth

This collection of stirring testimonies is an everlasting tribute to the reality of a powerful God who responds to the prayers of His children. Serving with her husband, Jonathan, on the front lines of China’s Boxer Rebellion at the dawn of the twentieth century, Rosalind Goforth was an eyewitness to the dramatic and miraculous ways in which the mighty hand of God responds to prayer during times of intense struggle.

This timeless Christian classic stands as a challenge for all believers to never give up reliance on God in prayer, no matter how great the obstacles.

▼▲
Rosalind Goforth (1864–1942) was born in England before moving to Montreal, Canada, with her parents at the age of three. Growing up, Rosalind intended to follow her father as an artist until she met and married Presbyterian missionary Jonathan Goforth. Together, they became the foremost missionaries to China and Manchuria in the twentieth century. They had eleven children, five of whom died as babies or young children. Rosalind died in Toronto, Canada, and is buried beside her husband.

▼▲
I'm the author/artist and I want to review How I Know God Answers Prayer: Miracles from the Mission Field of Jonathan Goforth - eBook.
Back
×
Back
×