Skip to main content
SPRING CYBER EVENT STARTS NOW: And it's a really BIG deal! Up to 88% off through 5/24>
How Can I Know?: Answers to Life's 7 Most Important Questions - eBook
By: Robert Jeffress
Stock No: WW102585EB 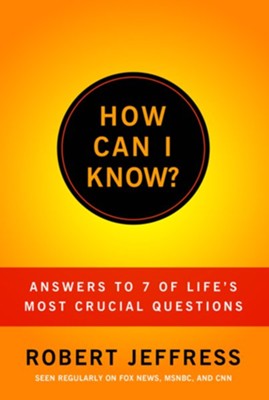 How Can I Know?: Answers to Life's 7 Most Important Questions - eBook

▼▲
If we are honest, every one of us has questions about our faith. We ask ourselves things like: "Is the Bible true?" "Why does God allow suffering?" "Am I truly forgiven?" "Will I really go to heaven when I die?" Dr. Robert Jeffress answers these and other challenging questions facing Christians today. Drawing upon the best research available, How Can I Know presents logical and concise responses that anyone can understand and easily share with others. In an age of information overload, simplicity is essential. Every chapter is filled with illustrations and application that will appeal to the average reader, giving them a renewed hope and reassurance of their faith.

Dr. Jeffress hosts a daily radio program, Pathway to Victory, that is heard nationwide on over 800 stations in major markets such as Dallas-Fort Worth, New York City, Chicago, Los Angeles, Washington, DC, Houston, and Seattle. His weekly television program can be seen in 195 countries and on 11,283 cable and satellite systems throughout the world, including China, and on the Trinity Broadcasting Network and Daystar.

Dr. Jeffress is the author of over twenty books, including Choosing the Extraordinary Life, When Forgiveness Doesn't Make Sense, Countdown to the Apocalypse, and Not All Roads Lead to Heaven. Dr. Jeffress recently led his congregation in the completion of a $135 million re-creation of its downtown campus. The project is the largest in modern church history and serves as a "spiritual oasis" covering six blocks of downtown Dallas.

Dr. Jeffress and his wife, Amy, have two daughters, Julia and Dorothy, and a Son-in-law, Ryan Sadler.

▼▲
I'm the author/artist and I want to review How Can I Know?: Answers to Life's 7 Most Important Questions - eBook.
Back
Back