We are OPEN and SHIPPING - click here for shipping estimates
Answers Book for Teens - eBook
By: Stacia McKeever 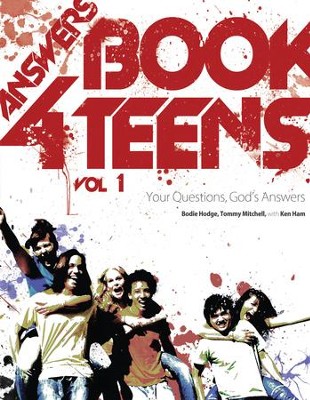 ▼▲
Fresh graphics and short, understandable chapters tackle some of the most difficult-to-wrestle-through questions that teen have today. This convenient evangelism tool provides creationist and conservative answers to questions such as:

There’s no mistake...God is seeking you.

Friends, teachers, and the world in general will tell you that Christianity and faith is a lie. Atheism and Eastern religions are more fashionable. The culture tells you to look and act certain ways or people will think you’re a loser or weird. If you say you believe in God, you can expect people to be in your face, doing their best to tear down God, the Bible, and your belief in Christ.

By now, you may even have a few doubts – everything seems so crazy and pointless, how can you believe God really does care about what is going on with you? Or if God is in charge of this chaos called life?

You aren’t the only one with questions! Find great answers to 15 popular faith questions and discover why the world is such a mess, why you can believe in Christ, and why God wants a relationship with you!

▼▲
I'm the author/artist and I want to review Answers Book for Teens - eBook.
Back
×
Back
×