Skip to main content
Answering the Call: The Doctor Who Made Africa His Life: The Remarkable Story of Albert Schweitzer - eBook
By: Ken Gire
Stock No: WW34795EB 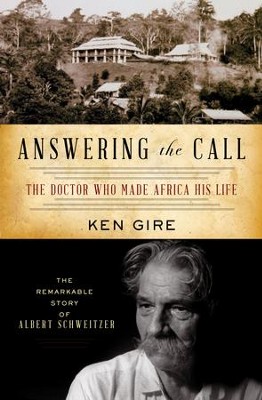 Answering the Call: The Doctor Who Made Africa His Life: The Remarkable Story of Albert Schweitzer - eBook

Revere life, and give yours away for the sake of serving others.

As a young man, Albert Schweitzer seemed destined for greatness. His immense talent and fortitude propelled him to a place as one of Europe’s most renowned philosophers, theologians, and musicians in the early twentieth century. Yet Schweitzer shocked his contemporaries by forsaking worldly success and embarking on an epic journey into the wilds of French Equatorial Africa, vowing to serve as a lifelong physician to “the least of these” in a mysterious land rife with famine, sickness, and superstition.

Ken Gire’s page-turning, novelesque narrative sheds new light on Schweitzer’s faith-in-action ethic and his commitment to honor God by celebrating the sacredness of all life.

The legacy of this 1952 Nobel Prize honoree endures in the thriving African hospital community that began in a humble chicken coop, in the millions who have drawn inspiration from his example, and in the challenge that emanates from his life story into our day.

Albert Schweitzer seemed destined for greatness—and he achieved it by making his life his greatest sermon to a world in desperate need of hope and healing.

Ken Gire is the author of more than 20 books including the bestsellers, The Divine Embrace and Intimate Moments with the Savior. A graduate of Texas Christian University and Dallas Theological Seminary, he lives in Texas.

▼▲
I'm the author/artist and I want to review Answering the Call: The Doctor Who Made Africa His Life: The Remarkable Story of Albert Schweitzer - eBook.
Back
Back