An Answer in Defence of the Truth Against the Apology of Private Mass
Edited By: William Goode
By: Thomas Cooper, John Jewel 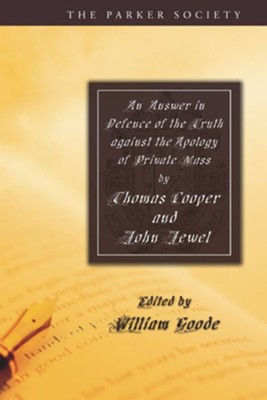 ▼▲
The Parker Society was the London-based Anglican society that printed in fifty-four volumes the works of the leading English Reformers of the sixteenth century. It was formed in 1840 and disbanded in 1855 when its work was completed. Named after Matthew Parker -- the first Elizabethan Archbishop of Canterbury, who was known as a great collector of books -- the stimulus for the foundation of the society was provided by the Tractarian movement, led by John Henry Newman and Edward B. Pusey. Some members of this movement spoke disparagingly of the English Reformation, and so some members of the Church of England felt the need to make available in an attractive form the works of the leaders of that Reformation.

▼▲
I'm the author/artist and I want to review An Answer in Defence of the Truth Against the Apology of Private Mass.
Back
×