Skip to main content
CUSTOMER APPRECIATION SALE: Thousands of starry deals through 6/22!
Another Man's War: The True Story of One Man's Battle to Save Children in the Sudan - eBook
By: Sam Childers
Stock No: WW4613EB 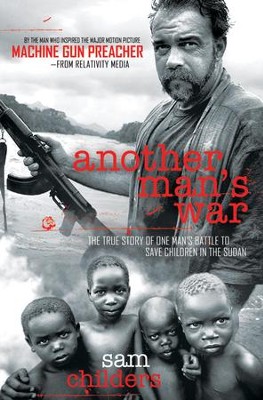 Another Man's War: The True Story of One Man's Battle to Save Children in the Sudan - eBook

By: Sam Childers
Thomas Nelson / 2011 / ePub
5 out of 5 stars for Another Man's War: The True Story of One Man's Battle to Save Children in the Sudan - eBook (1 Review) Write a Review
In Stock
Stock No: WW4613EB

▼▲
You've read the headlines about terrorist activity and human rights violations in Uganda and Sudan--human trafficking, mutilation, murder, and abduction to name a few. And thousands of children being forced to become child soldiers or sex slaves. After a medical missionary trip to the Sudan in 1998 Sam Childers decided to do something about it.

In Another Man's War Childers tells how God lead him from a life of drug dealing and crime to become a gun-toting preacher. He now leads a small militia and orphanage on a 40 acre compound in the midst of war-torn Sudan. Their mission--to rescue kidnapped and enslaved children from the LRA terrorist group. At all costs. His story is one you won't quickly forget.

A gun-toting preacher, a rebel army led by a madman, and entire villages slaughtered just because they were in the way.

In Another Man's War, follow Sam Childer's remarkable transformation from violent thug to a man of faith, and his ongoing battle to save children in one of the world's most lawless areas.

“Another Man’s War is about true terrorism . . . against more than 200,000 children in northern Uganda and Southern Sudan. Sam Childers—a fighter and a preacher (some call him a mercenary)—tirelessly leads a small militia into the jungle, daring to fight against a vicious army outnumbering him one thousand to one. One man can make a huge difference. Sam Childers certainly does.” ?Peter Fonda, actor/filmmaker, best known as star of Easy Rider

“The Reverend Sam Childers has been a very close friend to the government of South Sudan for many years and is a trusted friend.” ?President Salva Kiir Mayardit of South Sudan

“The Reverend Sam Childers is a long time devoted friend to our government and his courageous work is supported by us.” ?President Yoweri Museveni of Uganda

“Sam Childers is one of those rare men [who is] willing to do literally whatever it takes to promote the message of Jesus Christ and save children from the tyranny of evil men.” ?John Rich, lead singer and songwriter, Big & Rich

▼▲
Sam Childers is a former outlaw biker who now dedicates his life and resources to rescuing child soldiers in Sudan. Childers and his wife Lynn founded and operate Children’s Village orphanage in Nimule, Sudan, where they currently have 150 children in their care.

▼▲
I'm the author/artist and I want to review Another Man's War: The True Story of One Man's Battle to Save Children in the Sudan - eBook.
Back
Back