Skip to main content
SPRING CYBER EVENT STARTS NOW: And it's a really BIG deal! Up to 88% off through 5/24>
Another Day as Emily - eBook
By: Eileen Spinelli
Illustrated By: Joanne Lew-Vriethoff
Stock No: WW48985EB 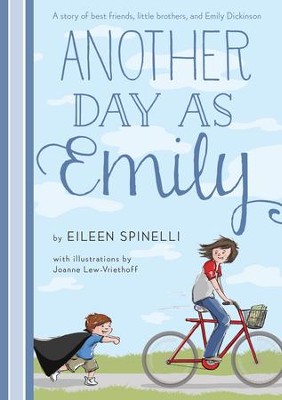 Another Day as Emily - eBook

Eleven-year-old Suzy just can't win. Her brother is a local hero for calling 911 after seeing their elderly neighbor collapse, and only her best friend was able to win a role in the play they both auditioned for. Feeling cast aside from all angles, Suzy sees a kindred spirit in Emily Dickinson, the subject of her summer project. Suzy decides to escape from her disappointments by emulating the poet's life of solitude: no visitors or phone calls (only letters delivered through her window), no friends (except her goldfish, Ottilie), and no outings (except church, but only if she can wear her long white Emily dress).

But being a recluse is harder than Suzy predicted. Will she find a way to fold Emily into her life while also remaining true to herself?

▼▲
EILEEN SPINELLI is the popular, critically acclaimed, and beloved author of nearly 50 children's books. Among these are the middle-grade novels Summerhouse Time and The Dancing Pancake and picture books such as Cold Snap and Princess Pig. Eileen and her husband live in Western Pennsylvania.

JOANNE LEW-VRIETHOFF graduated from the Art Center College of Design in 1995 and began her career creating characters for children's television. In 1997 she became the art director for New York's DiVision Studio, creating award-winning designs for various hi-profile clients. Since then she has moved to the Netherlands where she continues to forge her talents as a designer and illustrator. Joanne is married and has two children.

▼▲
I'm the author/artist and I want to review Another Day as Emily - eBook.
Back
Back