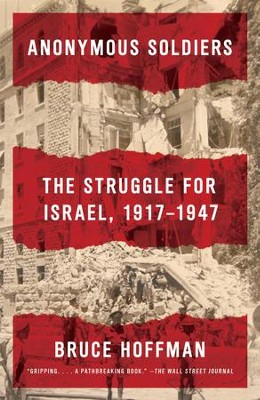 One of the Best Books of the Year
St. Louis Post-Dispatch * Kirkus Reviews

In this groundbreaking work, Bruce Hoffman—America’s leading expert on terrorism—brilliantly re-creates the crucial thirty-year period that led to the birth of Israel. Drawing on previously untapped archival resources in London, Washington, D.C., and Jerusalem, Anonymous Soldiers shows how the efforts of two militant Zionist groups brought about the end of British rule in the Middle East. Hoffman shines new light on the bombing of the King David Hotel, the assassination of Lord Moyne in Cairo, the leadership of Menachem Begin, the life and death of Abraham Stern, and much else. Above all, he shows exactly how the underdog "anonymous soldiers" of Irgun and Lehi defeated the British and set in motion the chain of events that resulted in the creation of the formidable nation-state of Israel.

One of the most detailed and sustained accounts of a terrorist and counterterrorist campaign ever written, Hoffman has crafted the definitive account of the struggle for Israel—and an impressive investigation of the efficacy of guerilla tactics. Anonymous Soldiers is essential to anyone wishing to understand the current situation in the Middle East.

Bruce Hoffman is the director of the Center for Security Studies and director of the Security Stud&shy;ies Program at Georgetown University’s Edmund A. Walsh School of Foreign Service. He is also a senior fellow at the U.S. Military Academy’s Combating Terrorism Center. His previous books include Inside Terrorism, The Evolution of the Global Terrorist Threat: From 9/11 to Osama Bin Laden’s Death, and The Failure of British Military Strategy Within Palestine, 1939–1947.

"A gripping narrative history . . . Its major contribution is to demonstrate that the Irgun-led insurgency played a larger role in paving the way for Israel’s founding than we previously believed . . . A pathbreaking book." – Michael Doran, The Wall Street Journal

"Riveting and deeply researched . . . Something remarkable . . . Hoffman excels at describing the complex internal politics of the terrorists, the Yishuv, and the British administration, which were constantly evolving . . . Extensive detail . . . Anonymous Soldiers does a wonderful job of elucidating this enormously complex and important period in Jewish history." —Adam Kirsch, Tablet

"A magisterial history that is indispensable to anyone wishing to understand how and why the State of Israel came into existence&hellip; More than most insurgent groups in history, the "anonymous soldiers" of Hoffman’s history left behind a legacy of accomplishment, as well as of terror—a conclusion as remarkable as the story that he has told so well." —Eliot A. Cohen, Foreign Affairs

"Gripping detail . . . Anonymous Soldiers can be seen as a corrective to the understatements and misstatements about the role of the Revisionist movement in the history of Zionism and, especially, the creation and defense of the Jewish state . . . An even-handed work of history that is, at the same time, a morally illuminating and challenging." —Jonathan Kirsch, Jewish Journal

"[Bruce Hoffman] presents a detailed chronicle of the guerrilla war waged by the Irgun, the Stern gang (also known as Lehi) and occasionally the Haganah against the British authorities . . . A valuable contribution . . . Hoffman is the first scholar of the subject to fully utilize the many thousands of British intelligence documents from the 1940s that have been declassified in recent years . . . Revealing." —Rafael Medoff, Haaretz

"An authoritative, sweeping, important history that shows how terrorism 'is neither irrational nor desperate but instead entirely rational and often carefully calculated and choreographed.'" —Kirkus (starred review)

"Drawing on prodigious research and employing fine narrative pacing, Hoffman has produced a first-rate work on the ’endgame’ in the Zionist struggle to establish a Jewish state." —Publishers Weekly (starred)

"Well-sourced, exhaustive . . . Those interested in the Arab-Israeli conflict will want this book in their library. Hoffman has written it without using the kind of accusatory language that often is the hallmark of such books . . . Written in an interesting style, and richly footnoted based on the author’s access to declassified British, Israeli and American documents." —St. Louis Post-Dispatch

"Terror works – at least sometimes – and there is no better proof than the success of the Israeli underground during the British Mandate in Palestine. In Anonymous Soldiers, Bruce Hoffman, the dean of counterterrorist scholars, explores the history and methods that would become the template for terrorist movements of the present day. This book will become a classic on the shelf of those who seek to understand and fight against non-state actors, who were themselves inspired by the Israeli example." —Lawrence Wright, author of The Looming Tower and Thirteen Days in September

"This is the most important book for years on the prehistory of the state of Israel. Based to a large extent sources not tapped hitherto. At the same time it is an invaluable contribution to the history of political violence and counterterrorism, shedding new light on conditions in which terrorism succeeds and when it fails." —Walter Laqueur, author of A History of Zionism

"Anonymous Soldiers is the best comprehensive study of the Jewish extremists' terror\guerrilla campaign against the British in Palestine in the years 1939-1947. It is also a fine case study of a modern insurgency and counter-insurgency, with lessons for all students of terrorist\urban guerrilla wars around the globe. Hoffman is properly mindful of what motivated both the Jews and the British and of the decision-making processes at each turn in the bloody saga. And it is based on a very thorough trawl through the British and American archives, making it a lasting contribution to the historiography of British Mandate Palestine. Henceforward, few will be able to avoid the conclusion that the extremists' bloodletting was a primary cause of Britain's decision to leave, indeed, abandon, Palestine." —Benny Morris, author of Righteous Victims

"This is Bruce Hoffman’s magnum opus. Hoffman asks an uncomfortable question: ’Does terrorism work?’ And he provides an uncomfortable answer in this deeply researched account of the Jewish terrorists who forced the British out of Palestine: Sometimes it does. Hoffman brings great analytic rigor to a history that is based on a deep dive into the relevant archives, many of which were hitherto secret and have been recently declassified. This is the definitive account of one of the key factors in the formation of Israel." — Peter Bergen, author of Manhunt: The Ten-Year Search for Bin Laden from 9/11 to Abbottabad

"Hoffman, who has studied and written extensively on terrorism in the Middle East, asserts that terrorist activities by the Jewish underground played an essential role in forcing Britain to abandon its mandate in Palestine, leading to the establishment of Israel in 1947. . . Well-researched and highly detailed . . . Thorough and well argued . . .  [With] important implications." —Jay Freeman, Booklist

"[An] exhaustive detailed history of British Mandate Palestine . . . A must read for anyone interested in the origins of the State of Israel." —Joel Neuberg, Library Journal