You Are Anointed for This!: Walk in confidence, boldness, and authority - eBook
By: Judy Jacobs 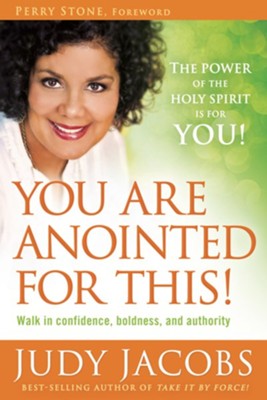 You Are Anointed for This!: Walk in confidence, boldness, and authority - eBook

The power of the Holy Spirit is for YOU!

God has gifted the body of Christ with so many gifts, and He wants you to use every one of them to advance the kingdom of God and to see lives changed through the power of the gospel. So whatever gift you have, in whatever capacity, and wherever you feel God has called you, you need to know that you are anointed for it!

You may be going through a particular hard season right now in your life. You need to know you are anointed for this!

▼▲
Judy Jacobs is known for her dynamic, inspiring, and anointed ministry. A recording artist, ordained minister, teacher, and sought-after conference speaker, she is the founder of His Song Ministries and the International Institute of Mentoring. She is the host of the television program Judy Jacobs Now!, which is aired on major Christian networks, as well as the yearly Press, Push, and Pursue conferences at various locations worldwide. She is also the author of Don’t Miss Your Moment, Take It by Force!, and Stand Strong.

▼▲
I'm the author/artist and I want to review You Are Anointed for This!: Walk in confidence, boldness, and authority - eBook.
Back
×
Back
×