We are OPEN and SHIPPING - click here for shipping estimates
PRE-SUMMER CYBER SALE: Shop over 2,500 items up to 90% off through 5/26 >
Anointed By the Spirit: A Study of Jesus and His Followers
By: John Howe 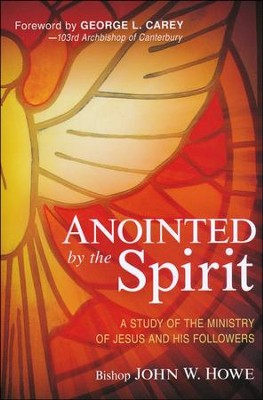 Anointed By the Spirit: A Study of Jesus and His Followers

In this powerful study of the anointing of the Holy Spirit, Bishop John Howe exhorts the church to embrace a comprehensive view of the life-changing power available for all followers of Christ. This inspired exposition presents the larger picture of the Spirit at work in the life and ministry of Jesus, while offering a detailed look at the nine spiritual gifts. Anointed by the Spirit will enlighten, encourage and equip you to operate in the full power of the Holy Spirit, and to use your spiritual gifts to advance the kingdom of God. "Now there are varieties of gifts, but the same Spirit...To each is given the manifestation of the Spirit for the common good." --1 Corinthians 12:4, 7

▼▲
We are to proclaim the gospel, make disciples, baptize them, and teach them to obey everything Jesus taught his first followers. That surely includes ministry in the power of the Spirit.

▼▲
John W. Howe became the third Bishop of the Episcopal Diocese of Central Florida on January 1, 1990. Bishop Howe earned a BA in philosophy, University of Connecticut, and a Master of Divinity from Yale Divinity School. He was awarded Doctor of Divinity degrees from Berkeley at Yale, The University of the South, Sewanee, and from Nashotah House, and earned his PhD from the Graduate Theological Foundation. Bishop Howe has conducted preaching and teaching missions throughout the United States and in some 17 countries around the world. His publications include two books, two monographs, and numerous magazine articles.

▼▲
From the Foreword
This is a wonderfully refreshing book. Bishop Howe takes ideas we have taken for granted and returns them to us recharged and with new insights. He laces his teaching with humor and with illustrations from long experience in Christian ministry. The author hammers home his conviction that nowhere in Christian history and experience does one find any basis for the idea that a victorious Christian life is for a few chosen people only. Indeed, there are no super spiritual Christians, only people like you and me who have learned that a powerful Christian life is Christ’s gift to us and one he longs for us to possess.
—George L. Carey
103rd Archbishop of Canterbury

My friend Bishop John Howe demonstrates that the gifts of the Holy Spirit were so essential in the ministry of Jesus, that Jesus himself becomes the chief model of how the gifts operate. To me, his ministry  encourages us as his followers to "strive for" the gifts in our own lives. I enjoyed reading Bishop’s examples of how spiritual gifts in the lives of contemporary Christians serve as "on ramps" into new dimensions of ministry.
—Steve Strang
Co-Founder, Charisma Media and Charisma Magazine

In this engaging and provocative work, Bishop Howe has truly broken new ground.  Written in a clear and accessible style, this book takes the reader on a journey deep into Scripture and into the life and  ministry of Jesus Christ. Offering a unique look at exactly when and how Jesus began his earthly ministry, the Bishop proposes a new idea concerning the role of the Holy Spirit in the ministry of Jesus Christ. From this unique foundation, this book goes on to show why the role of the Holy Spirit is so important in our lives and in our world. Although not all readers may agree with every idea in this book, I am certain that all readers will be stirred in thought, and hopefully, led to a new  sense of the importance of the Holy Spirit’s work in the life of Jesus Christ, as well as our own.
—Paul J. Kirbas, D.Min, PhD
Paul Tillich Professor of Theology and Culture
Graduate Theological Foundation

▼▲
I'm the author/artist and I want to review Anointed By the Spirit: A Study of Jesus and His Followers.
Back
×
Back
×