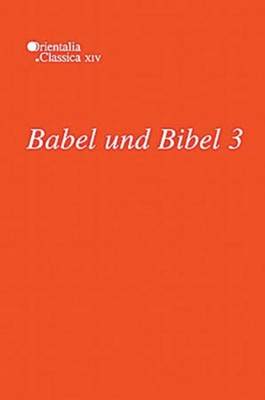 Edited By: Leonid E. Kogan, Natalia Koslova, Sergey Loesov, Serguel Tishchenko
More in Babel und Bibel Series
Penn State Press / 2007 / Hardcover
Write a Review
Expected to ship on or about 08/07/20.
Email me when this product is available.
Stock No: WW061344

This is the third volume of Babel & Bibel, an annual of ancient Near Eastern, Old Testament, and Semitic studies. The principal goal of the annual is to reveal the inherent relationship between Assyriology, Semitics, and biblical studies—a relationship that our predecessors comprehended and fruitfully explored but that is often neglected today. The title Babel & Bibel is intended to point to the possibility of fruitful collaboration among the three disciplines, in an effort to explore the various civilizations of the ancient Near East.

The tripartite division of Babel & Bibel corresponds to its three principal spheres of interest: ancient Near Eastern, Old Testament, and Semitic studies. Contributions are further subdivided into articles, short notes, and reviews.

▼▲
I'm the author/artist and I want to review Babel und Bibel 3: Annual of Ancient Near Eastern, Old Testament and Semitic Studies.
Back
×