Skip to main content
The Annihilation of Hell: Universal Salvation and the Redemption of Time in the Eschatology of Jergen Moltmann - eBook
By: Nicholas Ansell
Stock No: WW69307EB 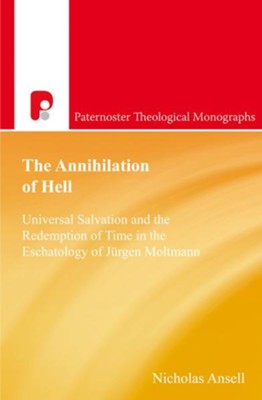 The Annihilation of Hell: Universal Salvation and the Redemption of Time in the Eschatology of Jergen Moltmann - eBook

▼▲
This work analyses and evaluates Jurgen Moltmann's model of universal salvation and its relation to his understanding of the redemption, or eschatological fulfilment, of time.
For Jurgen Moltmann, Hell is the nemesis of Hope. The 'Annihilation of Hell' thus refers both to Hell's annihilative power in history and to the overcoming of that power as envisioned by Moltmann's distinctive theology of the cross in which God becomes 'all in all' through Christ's descent into Godforsakenness. The negation of Hell and the fulfilment of history are inseparable. Attentive to the overall contours and dynamics of Moltmann's thinking, especially his zimzum doctrine of creation, his eschatologically oriented philosophy of time, and his expanded understanding of the nature-grace relationship, this study asks whether the universal salvation that he proposes can honour human freedom, promise vindication for those who suffer, and do justice to biblical revelation. As well as providing an in-depth exposition of Moltmann's ideas, The Annihilation of Hell also explores how a 'covenantal universalism' might revitalise our web of beliefs in a way that is attuned to the authorising of Scripture and the spirituality of existence. If divine and human freedom are to be reconciled, as Moltmann believes, the confrontation between Hell and hope will entail rethinking issues that are not only at the centre of theology but at the heart of life itself.

▼▲
NICHOLAS ANSELL is Assistant Professor of Theology, Institute for Christian Studies, Toronto.
His teaching and research focus on several areas of systematic and biblical theology, notably Christology, eschatology, Old Testament wisdom thinking, and the theology of gender. He has an ongoing interest in the phenomenology of revelation and the spirituality of existence

▼▲
I'm the author/artist and I want to review The Annihilation of Hell: Universal Salvation and the Redemption of Time in the Eschatology of Jergen Moltmann - eBook.
Back
Back