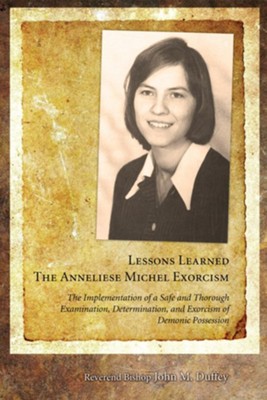 Lessons Learned: The Anneliese Michel Exorcism: The Implementation of a Safe and Thorough Examination, Determination, and Exorcism of Demonic Possession - eBook

▼▲
In 1976, a twenty-three year old German girl, named Anneliese Michel, died following months of exorcism sessions. Despite the fact that she had been medically diagnosed with epilepsy and manic depressive psychosis, two priests conducted numerous exorcism sessions and ignored her mental, medical, and physical condition. Doctors would later state that her cause of death was starvation and dehydration. Unfortunately, Ms. Michel's tragic death due to misdiagnosed demonic possession and negligently applied exorcism was neither the first nor the last of such negligence to occur. Complete familiarity with the spiritual elements of demonical possession and attack is the sole focus of most demonologists, exorcists, and clerical members of Christianity. Few clerics have a sufficient understanding of psychiatric conditions that may mimic the symptoms of demonic possession. The result has been catastrophic for many innocent people over the centuries. The overlooking or ignoring of a person's medical and psychiatric condition is the primary culprit behind misdiagnosed possession and botched exorcisms resulting in death or serious bodily injury. Father John Duffey, a New American Catholic priest, exposes the truth behind the young girl's death and renders a standardized approach to properly investigating suspected demoniacal possession, determining the existence of possession, and in the safe execution of exorcism/deliverance acceptable to virtually all denominations of the Christian faith. This book brings psychology, medicine, faith, legality, and safety together for the first time in order to enhance evaluation accuracy, demonic expulsion, wellbeing for the afflicted, and safety for all involved parties.

▼▲
John M. Duffey was first ordained as a protestant minister in 2004 and was accepted into the priesthood of the New American Catholic Church (NACC) in October of 2008. He has written a number of theses and regulatory documents for the NACC regarding family violence intervention, clerical ethics, and spiritual affliction/suffering.

▼▲
I'm the author/artist and I want to review Lessons Learned: The Anneliese Michel Exorcism: The Implementation of a Safe and Thorough Examination, Determination, and Exorcism of Demonic Possession - eBook.
Back
Back