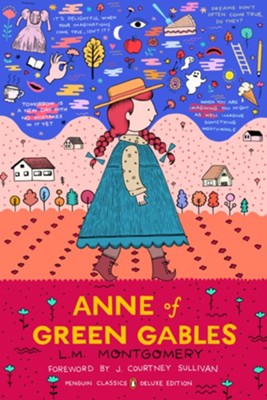 ▼▲
The beloved coming-of-age tale of a spunky heroine named Anne "with an E", for the first time as a Penguin Classics Deluxe Edition, with a foreword by bestselling author J. Courtney Sullivan. Nominated as one of America’s best-loved novels by PBS’s The Great American Read

L. M. Montgomery’s novel Anne of Green Gables recounts the adventures of Anne Shirley, an 11-year-old orphan mistakenly sent to a pair of siblings who intended to adopt a boy to help work on their farm in Prince Edward Island. Yet Anne’s quirky personality and good-natured spirit causes the siblings to grow to love her anyway, and soon the entire town falls for the precocious little girl with bright red hair.

Cherished by both children and adults, Anne of Green Gables is a celebration of fierce individualism, and the families we create, rather than the ones we are born into. This Deluxe edition is enhanced with a foreword by bestselling author J. Courtney Sullivan, and an introduction and suggestions for further reading by Benjamin Lefebvre, as well as a selection of early writing by L. M. Montgomery about the process of writing Anne.

For more than seventy years, Penguin has been the leading publisher of classic literature in the English-speaking world. With more than 1,800 titles, Penguin Classics represents a global bookshelf of the best works throughout history and across genres and disciplines. Readers trust the series to provide authoritative texts enhanced by introductions and notes by distinguished scholars and contemporary authors, as well as up-to-date translations by award-winning translators.

▼▲
L. M. Montgomery (1874-1942) is now widely recognized as a major twentieth-century author, one whose best-selling books remain hugely popular and influential all over the world three-quarters of a century after her death. Her first novel, Anne of Green Gables (1908), the benchmark against which her remaining body of work is measured, was followed by twenty-three additional books, including ten more featuring Anne Shirley: Anne of Avonlea (1909), Chronicles of Avonlea (1912), Anne of the Island (1915), Anne’s House of Dreams (1917), Rainbow Valley (1919), Further Chronicles of Avonlea (1920), Rilla of Ingleside (1921), Anne of Windy Poplars (1936), Anne of Ingleside (1939), and The Blythes Are Quoted, completed shortly before her death but not published in its entirety until 2009. During her distinguished career, she was made a Fellow of the British Royal Society of Arts, was named one of the twelve greatest women in Canada by the Toronto Star, and became an Officer of the Order of the British Empire. Since her death, several volumes of collected periodical pieces have been published, as have over a dozen volumes of journals, letters, essays, and scrapbooks. Both Ontario and Prince Edward Island are home to numerous tourist sites and archival collections, and her books continue to be adapted for stage and screen.

J. Courtney Sullivan is the New York Times best-selling author of the novels Saints for All Occasions, The Engagements, Maine, and Commencement. Maine was named a 2011 Time magazine Best Book of the Year and a Washington Post Notable Book. The Engagements was one of People magazine’s Top Ten Books of 2013 and an Irish Times Best Book of the Year, and has been translated into seventeen languages. She has contributed to The New York Times Book Review, the Chicago Tribune, New York Magazine, Elle, Glamour, Allure, Real Simple, and O: The Oprah Magazine, among many other publications. She lives in Brooklyn, New York.

Benjamin Lefebvre is the director of L.M. Montgomery Online. He is the editor of several books, including an edition of Montgomery’s rediscovered final book, The Blythes Are Quoted (2009), and the three-volume critical anthology The L.M. Montgomery Reader (2013–15), which won the 2016 PROSE Award by the Association of American Publishers. He lives in Kitchener, Ontario.

▼▲
"Anne is the kind of gal we can all relate to; she screws up a lot, she has a healthy handful of frenemies, she talks back a lot and sometimes wishes she had a different life, a different name, and definitely different hair. But that's what makes [Anne of Green Gables] so perfect for when your real-world anxiety is off the charts. No matter what happens, Anne always finds the beauty in the world."
—Kerri Jarema, Bustle

"Rather than dispense the message that it’s only what’s on the inside that counts, ’Anne of Green Gables’ conveys something more nuanced, that beauty can be a pleasure, that costumes can provide succor, that the right dress can improve your life — all things that adults know to be true, sometimes, but that we try to simplify for our children."
—Willa Paskin, The New York Times Magazine

▼▲
I'm the author/artist and I want to review Anne of Green Gables: (Penguin Classics Deluxe Edition) - eBook.
Back
Back