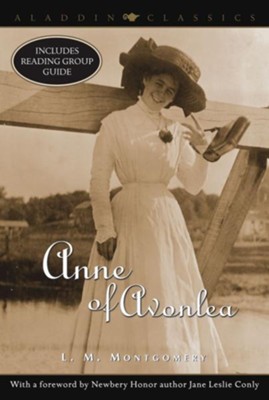 ▼▲
The inimitable Anne Shirley makes her mark on Avonlea in this artfully packaged edition of the sequel to Anne of Green Gables.

Five years after Anne Shirley came to the town of Avonlea, she feels (a little) more grown up, but she’s still the same skinny, red-headed orphan Matthew and Marilla Cuthbert took in. After putting her dream of attending Redmond College on hold so she can help Marilla with the farm, Anne doubts she has many adventures ahead of her. But even in plain old Avonlea, her life proves to be anything but ordinary.

This sequel to Anne of Green Gables follows Anne’s endeavors to become a successful teacher, help raise a pair of rambunctious twins, and improve her beloved hometown—with the help of her former enemy, Gilbert Blythe, who’s giving her an awful lot of attention…

This addition to the renowned Anne of Green Gables series makes a wonderful gift and keepsake.

▼▲
Lucy Maud Montgomery (November 30, 1874–April 24, 1942) publicly known as L.M. Montgomery, was a Canadian author best known for a series of novels beginning with Anne of Green Gables, published in 1908. Anne of Green Gables was an immediate success. The central character, Anne, an orphaned girl, made Montgomery famous in her lifetime and gave her an international following. The first novel was followed by a series of sequels. Montgomery went on to publish twenty novels as well as 500 short stories and poems. Because many of the novels were set on Prince Edward Island, Canada and the Canadian province became literary landmarks. She was awarded Officer of the Order of the British Empire in 1935.

▼▲
I'm the author/artist and I want to review Anne of Avonlea - eBook.
Back
Back