Skip to main content
Anne of Green Gables/Anne of the Island/Anne of Avonlea
By: L.M. Montgomery
Stock No: WW333062 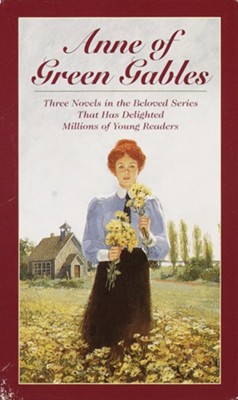 ▼▲
This Collector's Edition includes: The original, unabridgged text A specially commissioned biography of L.M. Montgomery A map of Prince Edward Island Anne of Green Gables: As soon as Anne Shirley arrives at the snug white farmhouse called Green Gables, she is sure she wants to stay forever...but will the Cuthberts send her back to the orphanage? Anne knows she's not what they expected--a skinny girl with fiery red hair and a temper to match. If only she can convince them to let her stay, she'll try very hard not to keep rushing headlong into scrapes and blurting out the first thing that comes to her mind. Anne is not like anybody else, the Cuthberts agree; she is special--a girl with an enormous imagination. This orphan girl dreams of the day when she can call herself Anne of Green Gables.< Anne of Avonlea: At sixteen, Anne is grown up...almost. Her gray eyes shine like the evening stars, but her red hair is still as peppery as her temper. In the years since she arrived at Green Gables as a freckle-faced orphan, she has earned the love of the people of Avonlea and a reputation for getting into scrapes. But when Anne begins her job as the new schoolteacher, the real test of her character begins. Along with teaching the three Rs, she is learning how complicated life can be when she meddles in someone else's romance, finds two new orphans at Green Gables, and wonders about the strange behavior of the very handsome Gilbert Blythe. As Anne enters womanhood, her adventures touch the heart and the funny bone.< Anne of the Island: New Adventures lie ahead as Anne Shirley packs her bags, waves goodbye to childhood, and heads for Redmond College. With her old friend Prissy Grant waiting in the bustling city of Kingsport and her frivolous new friend Philippa Gordon at her side, Anne tucks away her memories of rural Avonlea and discovers life on her own terms, filled with surprises...including a marriage proposal from the worst fellow imaginable, the sale of her very first story, and a tragedy that teaches her a painful lesson. But tears turn to laughter when Anne and her friends move into an old cottage andd an ornery black cat steals her heart. Little does Anne know that handsome Gilbert Blythe wants to win her heart, too. Anne must decide whether she's ready for love.

▼▲
Anne of Green Gables
Anne (with an e of course) starts out as a mistake. The elderly Matthew and Marilla Cuthbert had planned on adopting a boy to help Matthew with the chores on their Prince Edward Island farm. What are they to do with the red-haired, high-spirited girl who arrives instead?

Anne of Avonlea
It seemed only yesterday that the skinny, freckle-faced redhead had first come to the island. Now here is Anne, teaching at the Avonlea school, 16, pretty, and all grown up. Well, not quite grown up. In fact, Anne is not very different from her restless young pupils—mischievous and spirited as ever and headed for hilarious predicaments with a cranky new neighbor, a hungry Jersey cow, a parrot with an embarrassing vocabulary, and a truly dreadful mistake!

Anne of the Island
New adventures lie ahead as Anne Shirley packs her bags, waves good-bye to childhood, and heads for Redmond College. With old friend Prissy Grant waiting in the bustling city of Kingsport and frivolous new pal Philippa Gordon at her side, Anne tucks her memories of rural Avonlea away and discovers life on her own terms, filled with surprises . . . including a marriage proposal from the worst fellow imaginable, the sale of her very first story, and tragedy that teaches her a painful lesson.

▼▲
L. M. Montgomery was born in 1874 on Prince Edward Island in Canada, the setting of 19 of her 20 novels. Included among these books are her beloved Anne of Green Gables series and a number of other novels and short story collections. She died in Toronto in 1942.

▼▲
I'm the author/artist and I want to review Anne of Green Gables/Anne of the Island/Anne of Avonlea.
Back