We are OPEN and SHIPPING - click here for shipping estimates
PRE-SUMMER CYBER SALE EXTENDED thru 6/1 ~ Over 2,500 items up to 90% off
Anne of Avonlea, Unabridged Audiobook on MP3 with eBook
Narrated By: Shelly Frasier
By: L.M. Montgomery 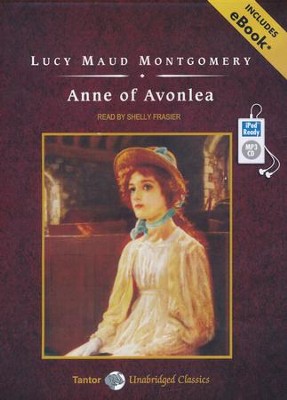 Anne of Avonlea, Unabridged Audiobook on MP3 with eBook

▼▲
In the first sequel to Anne of Green Gables, Lucy Maud Montgomery's feisty, redheaded heroine is now sixteen and a schoolteacher in the small village of Avonlea on Prince Edward Island. Although older, Anne Shirley isn't necessarily wiser---and she hasn't outgrown her mischievous ways. Anne learns how complicated life can be when she takes two new orphans at Green Gables under her wings, meddles in someone else's love life, and learns about romance herself when she encounters the "odd behavior" of the very handsome Gilbert Blythe.

▼▲
I'm the author/artist and I want to review Anne of Avonlea, Unabridged Audiobook on MP3 with eBook.
Back
×
Back
×