We are OPEN and SHIPPING - click here for shipping estimates
PRE-SUMMER CYBER SALE EXTENDED thru 6/1 ~ Over 2,500 items up to 90% off
Anna's Act of Love / Elsa's Icy Magic - 2 in 1
By: RH Disney
Illustrated By: RH Disney 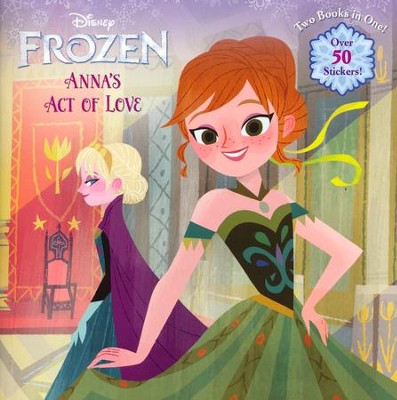 ▼▲
Read the Frozen story through the eyes of both Anna and Elsa in this dual book. This softcover book features 2-illustrated stories in one and includes over 50 stickers to decorate the pages, or use to decorate anything! Titles are: Anna's Act of Love and Elsa's Icy Magic. Recommended for ages 3 to 7 years.

▼▲
Fearless optimist Anna sets off on an epic journey—teaming up with rugged mountain man Kristoff and his loyal reindeer Sven—to find her sister Elsa, whose icy powers have trapped the kingdom of Arendelle in eternal winter. Encountering Everest-like conditions, mystical trolls and a hilarious snowman named Olaf, Anna, and Kristoff battle the elements in a race to save the kingdom. Children ages 3-7 will love this full-color storybook based on the film Disney Frozen.