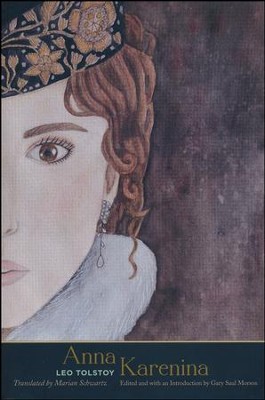 ▼▲
Tolstoy's epic novel of love, destiny and self-destruction, in a gorgeous new clothbound edition from Penguin Classics. Anna Karenina seems to have everything - beauty, wealth, popularity and an adored son. But she feels that her life is empty until the moment she encounters the impetuous officer Count Vronsky. Their subsequent affair scandalizes society and family alike and soon brings jealously and bitterness in its wake. Contrasting with this tale of love and self-destruction is the vividly observed story of Levin, a man striving to find contentment and a meaning to his life - and also a self-portrait of Tolstoy himself.

Tolstoy produced many drafts of Anna Karenina. Crafting and recrafting each sentence with careful intent, he was anything but casual in his use of language. His project, translator Marian Schwartz observes, "was to bend language to his will, as an instrument of his aesthetic and moral convictions." In her magnificent new translation, Schwartz embraces Tolstoy’s unusual style—she is the first English language translator ever to do so. Previous translations have departed from Tolstoy’s original, "correcting" supposed mistakes and infelicities. But Schwartz uses repetition where Tolstoy does, wields a judicious clich&eacute; when he does, and strips down descriptive passages as he does, re-creating his style in English with imagination and skill.

Tolstoy’s romantic Anna, long-suffering Karenin, dashing Vronsky, and dozens of their family members, friends, and neighbors are among the most vivid characters in world literature. In the thought-provoking Introduction to this volume, Gary Saul Morson provides unusual insights into these characters, exploring what they reveal about Tolstoy’s radical conclusions on romantic love, intellectual dishonesty, the nature of happiness, the course of true evil, and more. For readers at every stage—from students first encountering Anna to literary professionals revisiting the novel—this volume will stand as the English reader’s clear first choice.

▼▲
"The translation is the most accurate Tolstoy we have in English. Marian Schwartz has been a major force in bringing Russian literature into English for many years, but this is her masterpiece."—Michael Holquist, author of Dostoevsky and the Novel
-- Michael Holquist

"If there is a Tolstoyan out there who is interested in reading a translation that is exquisitely mindful of the book’s complex texture, or someone who has meant to get to Karenina but hasn’t yet got around to this particular pleasure, Schwartz’s tribute to Tolstoy’s craft and sensitivity should be at the top of the list."—Jim Kates, Arts Fuse
-- Arts Fuse

▼▲
I'm the author/artist and I want to review Anna Karenina.
Back
Back